ASTANA – Deputy Chairman of the Committee for Atomic Energy of the Ministry of Industry and New Technologies Timur Zhantikin said Kazakhstan would sign an agreement on establishing a low-enriched uranium bank (BLEU) in 2014. The bank, to be set up under the auspices of the International Atomic Energy Agency (IAEA), will contain a reserve supply of uranium suitable for creating fuel for nuclear power plants. 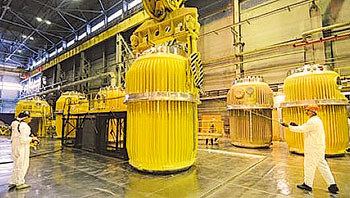 The LEU bank is to be set up under the authority of the International Atomic Energy Agency.

“The decision will be taken after satisfying all the comments of international expert groups. This will not be in fall 2013, as there are a number of questions on the placement of the bank. The question has arisen of how safe are the facilities, built in the 1940s, in which it is planned to place the bank? Now we are bringing the whole system up to international standards,” Zhantikin told reporters following the most recent round of talks in Vienna, where IAEA is headquartered, in late September.

As he emphasised, the signing of the documents to establish the bank was scheduled for October this year; however, “it is not that simple,” he said.

“The next round of negotiations has been scheduled. Now, in optimistic forecasts, we assume that next year negotiations on the agreement will be completed. Plus, we have to work out issues of modernising our security system regulation and further developing a technical plan for the implementation of security systems of the Ulba plant [in Ust-Kamenogorsk] where the fuel bank is to be located,” Zhantikin explained.

“With regard to a ‘nuclear fuel bank,’ it is not called this, because there will be no fuel. The correct name is a bank of low-enriched uranium. This is the storage of low-enriched uranium in the form of chemical compounds of uranium hexafluoride. Not going into the details of the technological process, fuel can be produced of it,” the deputy chairman said. Kazakhstan is in the process of working out a number of issues regarding the safe functioning of this bank with the International Atomic Energy Agency (IAEA).

“We have received about 12 technical missions of the IAEA, including the regulatory framework, a set of laws; the whole package will be thoroughly studied,” Zhantikin said.

Earlier this year, Ambassador-at-Large at the Ministry of Foreign Affairs Barlybay Sadykov also commented on establishing the bank in Kazakhstan.

“Placing the bank in Kazakhstan, to some extent, will enhance our security. The bank, as the property of the IAEA, will be under the constant attention of the member states of the organisation in order to prevent the attacks on it,” Sadykov said.

According to experts, low-enriched uranium is not an attractive material for terrorists. The Ulba Metallurgical Plant, where the bank is intended to be located, has worked with uranium for 60 years. The plant has stored low-enriched uranium at volumes of up to 1,500 tons.

Currently, the plant stores about 800 tons. The IAEA plans to put 60-80 tons of LEU in storage for the future bank which countries could turn to if their regular supplies were cut and buy the fuel there at market prices.

Sadykov also noted that the presence of the IAEA in Kazakhstan will mean increased attention from the organisation and a more careful and thorough monitoring of all stages of the treatment of nuclear installations and radioactive materials.

“This will strengthen our internal discipline in the uranium sector, which is already ranked very highly today by the agency. Moreover, the selection of Kazakhstan as the location of the bank by the IAEA is an indication of confidence in the stability of the country, the political commitment to non-proliferation and the implementation of the commitments made, and a high level of organisation in work in the nuclear field,” Sadykov added. The IAEA will own the LEU stored in the bank, and LEU would be under its control and in its official legal possession.

The LEU bank is to be partly funded by U.S. billionaire and philanthropist Warren Buffett, whose $50 million donation through Washington-based non-governmental Nuclear Threat Initiative (NTI) was supplemented by the United States, Norway, the United Arab Emirates as well as the European Union, bringing the total to more than $150 million needed for the establishment of the bank. Kazakhstan pledged to contribute in-kind through supplying and furnishing the facilities for the future bank.

Similar assessments in terms of timing for the establishment of a bank are also now being made by NTI experts, whose co-chairman Sam Nunn first voiced the proposal of establishing such a bank in 2006. The Oct. 2 Reuters report from Vienna quoted Corey Hinderstein, an NTI vice president who was a deputy director and senior analyst at the Institute for Science and International Security before joining NTI, as saying that she was “optimistic that I will be able to see the cutting of the ribbon of the fuel bank by the end of 2014.”