By Michelle Witte in Nation on 9 October 2013

ASTANA – One of the steppe’s strangest creatures is on its way to becoming the funny-looking face of biodiversity conservation in Kazakhstan. 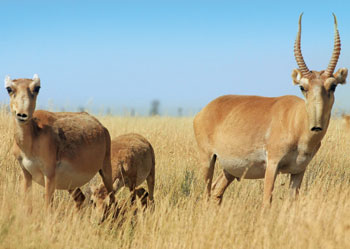 The saiga, a small antelope with a distinctive short trunk, is integral to steppe health but was almost lost in the late 1990s. Over the last decade, populations have rebounded, but the saiga is not out of the woods yet.

Saiga are a crucial part of the steppe ecosystem, which is defined by a particular composition of vegetation. Without saiga and other grazing animals, that composition of vegetation changes. Between 1992 and 2003, saiga populations plummeted from about one million to just over 20,000, and the saiga was put on the red list of the International Union for the Conservation of Nature (IUCN) of critically endangered species. Since 2004, however, conservation efforts have helped the saiga come back to a population of about 150,000 today.

Combating poaching has been the biggest reason for the comeback, says Olga Klimanova, director of the Association for the Conservation of Biodiversity in Kazakhstan (ACBK), which works extensively in saiga conservation. “It’s multiple factors. The government increased funding and Okhotzooprom (an arm of the Committee of Forestry and Hunting) was able to increase the number of rangers. Plus, they bought cars, so now they are quite organised in doing patrols.”

The government’s technology still lags behind the poachers’, Klimanova said, but catching up even slightly has made a big difference. “Only two years ago there were really few cars and millions of hectares, and (buying more cars) really did help. Also, they have a helicopter, and when the poachers are really active, they do patrols from the sky. And also the hunting areas that are in (saiga) areas, they have rangers and they have also helped Okhotzooprom.”

ACBK is working closely with Kazakhstan’s borders and customs agencies to stop saiga horns, which are used in traditional Chinese medicine, from crossing Kazakhstan’s borders. A recent project funded the training of dogs to identify saiga horns. Other initiatives, like migration corridors between official protected areas, are also helping saiga numbers grow.

One of the biggest successes is the new Altyn Dala Conservation Initiative, a reserve which corresponds to the distribution of one saiga population. “This is a very good result of our joint action with the government. … The government is already providing funding and (the park is) active. This year, the protected area has about 100 staff already and they’re doing patrols in the area,” Klimanova said.

More radical approaches to the poaching problem have also been proposed, including those by the Association of Traditional Chinese Medicine in Kazakhstan. The group would like to find anti-poaching measures and regulate the Chinese market. However, the Kazakhstan government isn’t convinced legal trade would reduce poaching, said Klimanova.

The Ustyurt population lives between Kazakhstan and Uzbekistan, meaning they face pressure from poachers on both sides. Kazakhstan’s recent development has also caused trouble for these saiga. The Customs Union fence has blocked them from migrating and a new railway runs through some of their range. ACBK is working with the government to mitigate these stresses and the border police have agreed to modify their fence to allow saiga to pass through, Klimanova said. As for the new railway to the Aktau port, ACBK’s recommended design changes to help saiga cross the tracks have been accepted, but they may not be enough.

“For Ustyurt, this may kill the population. All this: the fence, the railroad, the poachers … it’s all very difficult. And unfortunately, this project will be ending in the middle of next year, so … all the partners are taking actions to fundraise to continue this work.” ACBK’s partners include the Frankfurt Zoological Society, the Disney Worldwide Conservation Fund, USAID, the Darwin Initiative and Flora and Fauna International, who manage many of the saiga projects at the international level.

ACBK also conducts education outreach, especially among poor populations living with the saiga who sometimes kill the animals for food or income. “We started from 2006 to do a lot of education … For the last two years, we have had saiga day celebrations and we are trying to do it as an international day together with other range countries. It’s really good, because people there … are really deprived of many resources of information, of books, anything,” she said, adding however, the more awareness about biodiversity in general is needed.

To that end, ACBK initiated last year a project to help improve Kazakhstan’s policies on biodiversity management in general. The programme will be funded mainly by the government and the UNDP (United Nations Development Programme). “It’s really a very good sign from the government that they agreed to support this project … It will be implemented over two years and will be purely focused on policy development and legislation,” she said.

Though Klimanova sometimes gets frustrated with the slow pace of change—for example, Kazakhstan and Uzbekistan’s failure over the last five years to sign a joint saiga conservation action plan—Klimanova said the government has been a good partner overall. “I think the government is doing quite well, because they managed over just three years to … increase the funding for anti-poaching measures for saiga and to designate and make operational huge protected areas mostly focused on the saiga population.”

Klimanova says biodiversity is not a priority of the government right now. Despite that, there has been good news for much of the saiga population in Kazakhstan—which means good news for the country’s unique steppe.