Kazakhstan was victorious in the Oct. 6 Canoeing Asian Championship held in Samarkand. 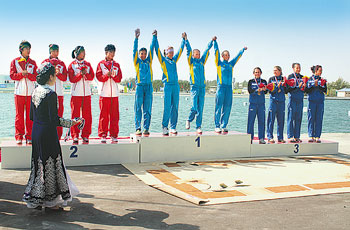 The event was the first time that Samarkand, a city unique for its historical monuments, hosted the Asian Championship, where teams from 22 countries competed.

From the very beginning, Kazakhstan teams were among the leaders. Both adult and youth teams fought for the championship. Canoe four won the gold for Kazakhstan in the 1,000-metre race. Sergey Yemelyanov, Gennady Goncharov, Anton Alshansky, Akhat Bekbossyn won after overtaking crews from India and Uzbekistan for the first time.

The women’s team won a sensational victory. In the 500-metre canoe competition, canoe four was side by side with the Chinese team, and literally in the last seconds, the Kazakh athletes took the lead.

“We have not had such a victory for a long time. We could not win against the Chinese team before this competition,” a crew member of canoe four Natalia Sergeyeva said.

Serious contenders for victory were also an Iranian team that is gaining momentum and, of course, the hosts of the competition – Uzbekistan.

Kazakhstan canoe pros Yevgeny Alekseyev and Alexey Dergunov implemented the Olympic programme to win the gold medal in the 500-meter race. Iran took second place, bronze went to the hosts of the competition.

At the competition in Samarkand, Kazakhstan’s rowers appeared fit. In Asia, the Kazakh athletes are among the best. The team has undergone a big push over the past two years. Major international rowing competitions are not held without Kazakhstan. The sports universe is lit up with new stars like Sergey Yemelyanov, Yevgeny Alekseyev, Mikhail and Timofey Yemelyanov. International coaches also note the progressive development of rowing in Kazakhstan.

“The Kazakhstan team is very strong. Previously, the Soviet Union was considered a leader. After the Soviet collapse, Kazakhstan rowers began taking first place. In Indonesia, canoe rowing is just developing. We still have a long way to go to match Kazakhstan,” said Mohammed Suriyari, the Indonesian coach.

A new rowing canal allows Uzbekistan to hold competitions of this magnitude. Its construction was completed last year. The canal length is about 2.5 kilometres with a width of 130 metres. A rowing base, hotel for athletes and a 2,000-seat platform have been built on-site.

Despite numerous victories in the Asian and world championships, Kazakhstan rowers still do not have their own training centre or canal. It is likely that next year, a rowing canal in Shymkent in South Kazakhstan will finally be built.

On Oct. 6 in Uzbekistan, the adult team won a total of six gold, seven silver and seven bronze medals. Of them, five medals of the highest category were taken by South Kazakhstan athletes. Kazakhstan juniors were brilliant at the competition. They got nine gold, seven silver and seven bronze medals. The absolute champions of Asia are Yevgeny Alekseyev and Alexey Dergunov, winning gold medals in three distances. At these competitions, Sergey Yemelyanov played in the youth team, and it allowed the senior team some relaxation.

Now, Kazakhstan rowers are preparing for next season. In 2014, the Asian Games will take place.