By Uak Manbeteyev in Culture on 17 October 2013 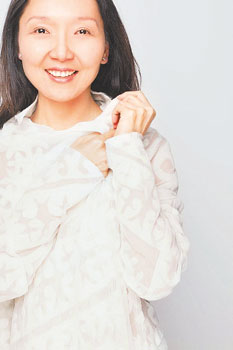 Zhaksybay’s “White Luxury” collection includes tunics and jackets from tricotine and dresses from chiffon and felt, which are not overloaded with ethnic motifs. The designs play with many shades of white and include a bold combination of fabrics, as well as understated accessories.

Zhaksybay turned to fashion after earning an economics degree from Duke University in the United States and working for 10 years for large US-based consulting firms. Her father, civil engineer Onlanbek Zhaksybay who had insisted she returned to Kazakhstan, was not initially pleased with Zhaksybay’s foray into an industry he considered less than serious. But he now supports her fully and is a big fan of her designs.