On Sept. 27 and 28, Kazakhstan President Nursultan Nazarbayev visited Monaco where he attended the Monaco-Kazakhstan Business Forum and a presentation on the urban and financial development of the Principality of Monaco at the oceanographic museum in Monte Carlo. 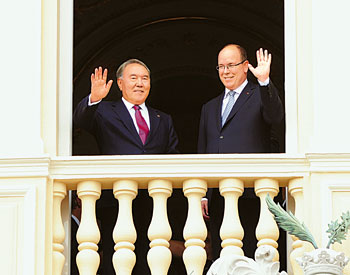 During the event, an impressive number of participants representing businesses and state organs of both countries gathered. An official signing ceremony of an agreement establishing a joint Business Council between Kazakhstan and Monaco, as well as a number of bilateral documents took place.

After the opening ceremony, President Nazarbayev had a formal meeting with Prince Albert II of Monaco and the two leaders negotiated on political, trade and economic issues, as well as investment cooperation.

Nursultan Nazarbayev and Albert II also discussed the implementation of agreements for the development of a full partnership, the main directions of which were specified in the joint declaration of the heads of state.

President Nazarbayev noted that Kazakhstan considers Monaco a promising partner in Southern Europe and all prerequisites for the expansion of economic and investment interaction exist.

It was also highlighted that business relations between the two countries increased after the first official visit of Monaco’s Prince to Kazakhstan in November last year, which laid the basis for bilateral cooperation.

At the same time, the level of trade and economic relations between the two countries has not reached full capacity. One of the tools of its expansion is the creation of the Kazakhstan-Monaco Business Council.

Kazakhstan is interested in attracting Monaco based companies to initiate projects in energy-efficient construction, renewable energy, tourism, service infrastructure, pharmaceuticals and electronics, as Kazakhstan already has a competitive edge in them.

In turn, Kazakhstan, as a member of the Customs Union, would provide broad market perspectives for Monaco businesses.

Monaco has built an effective economy that shows sustainable GDP growth rates while maintaining almost zero inflation and low unemployment and supporting a favourable social environment. Monaco’s experience is very attractive in forming a favourable business climate and assuring strong economic indicators with limited amounts of resources. In regards to GDP per capita, Monaco is a leader with a GDP of$163,000 in 2012.

Environmental protection is one of this country’s priorities. Interaction in this sphere was discussed by high officials, as was the “Green Bridge” partnership programme, which is focused on the green economy, as well as participation in preparation for EXPO 2017 in Astana.

Cooperation between the two countries in tourism is of high interest given the projects elaborated on by Kazakhstan and Monaco’s experience.

At the negotiations, the parties considered opportunities for the development of cultural and humanitarian interaction. The impetus to this was the opening of the exhibition “Epoch of Grace Kelly, Princess of Monaco” in Astana last year. Cooperation between the Astana Opera and the Opera of Monte Carlo is one way cultural ties will be strengthened.

Monaco citizens will also have the opportunity to get acquainted with Kazakh culture and art during the Season of Kazakh culture in France next year.

The heads of state discussed ways to increase bilateral interaction within international organizations, primarily the UN. Both

An agreement on tourism was signed. According to the press service of the national agency for exports and investments, “Kaznex Invest” of the Ministry of Industry and New Technologies, bilateral documents worth more than $73 million were signed. The documents include a memorandum for the construction of a composite panel plant in Almaty for $24.5 million. The enterprise will create 210 jobs.

“Astana Trade International” and Monaco businessmen have joint plans to build a hotel complex, Monaco will cooperate with the Kazakhstan city of Kyzylorda on the construction of a hotel and service stations. The region intends to implement a project for the creation of green houses and solar power stations with Monaco based company Hydroconcept Solar.

The most promising areas of bilateral cooperation are finance, construction and new technologies (energy saving and use of renewable energy sources), tourism and sport.

After the Kazakhstan President’s official visit, Monaco ambassador to Kazakhstan Evelyne Genta noted the special importance the country attached to the meeting.

“We attach great importance to the visit. Last year, Prince Albert II paid an official visit to Kazakhstan. He was warmly welcomed and we were satisfied with the results of those talks. Now, President Nursultan Nazarbayev has paid an official return visit to our country,” she said.

Diplomatic relations between Kazakhstan and Monaco were established on Jan. 15, 2009.