ASTANA – The Globalisation of Art international exhibition dedicated to Teacher’s Day opened to the public on Sept. 5th at the Palace of Schoolchildren and will run until Oct. 25.

The exhibition, which includes sculptures and impressionist paintings, many of which are visiting Astana for the first time, has been arranged in collaboration with the Global Art international art fund. Martine Rivasi-Offant, a French artist who has spent the last four years in Kazakhstan working closely with young painters, opened the exhibition with a speech. She talked about the impressionist movement and described its techniques, which broke the rules of academic painting of that time. Rivasi-Offant presented a movie, “Scandalous Impressionists,” directed by Francois Levy-Kuentz, which described the struggles of rebellious artists such as Monet, Renoir, Pissarro and Degas, who invented the new style of painting, which was later called impressionism.

The exhibition showcased canvases by Kazakh and French painters who work in the impressionist style as well as painting by Haileybury pupils, who dedicated their works to teachers in honour of the holiday. Paintings by Kazakh artists Yerlan Nazarkul, Gulmira Telgozieyva, Armat Bektas and others that have exhibited in the galleries of New York, London, Paris, Tokyo and Osaka are now accessible to the public of Astana.

“It gives me real pleasure to open this exhibition depicting the world under the impressionism prism,” said Marzhan Abildina, one of the organisers. “It is important to me that we can host exhibitions that encourage people to create and explore new ways of self-expression.”

The exhibition was also attended by the headmaster of Haileybury Astana, Colin Callaghan, who thanked the organisers for holding the collaborative exhibition, which kicked off Teacher’s Day celebrations and provided a chance for the public to get a look not only at masterpieces by mature artists but also enjoy pieces of art created by Haileybury’s budding artists. 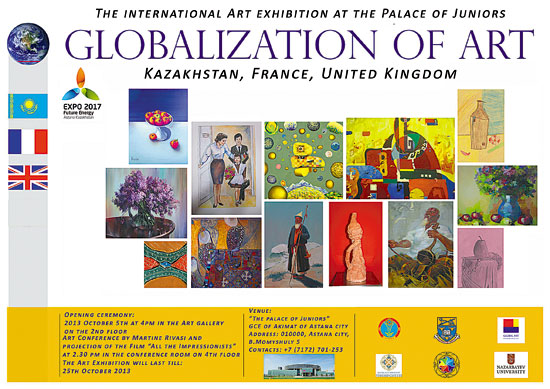