By Askar Beissenbayev in Sports on 9 October 2013

The capital’s basketball team, Astana, presented new players and discussed hopes for the coming season at a special presentation held before the start of the regular season. With several new players and a strong overall roster, the team is expected to reach the playoffs. 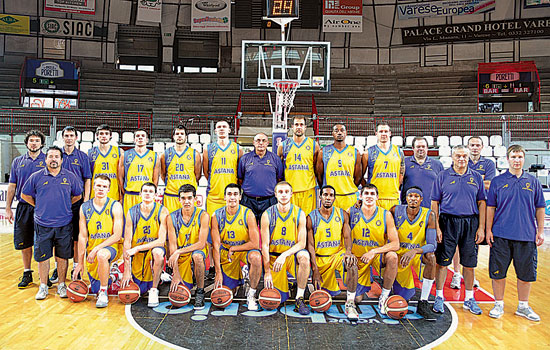 The Astana basketball team is preparing for the new season of the VTB league that will kick off on October 14.

The meeting with the basketball players aroused great interest among fans and the media. According to Darkhan Kaletayev, managing director of Samruk Kazyna and chairman of guardian’s council of the Astana team, the capital’s club has every chance of becoming one of the most recognisable sport brands of the country soon. The athletes performed well last season and in the new season they are expected to get into the playoffs and compete for the title of best team in the VTB league.

“We have kept the backbone and replenished the team with strong players [including] Timur Sultanov, who played in Tobol and who is a member of the national team of Kazakhstan. Also, Astana signed a contract with Pat Kalates, who won the championship of Israel and was recognised as the most valuable player of the league. In addition, such unique athletes as Olasheni Abdul-Gelle Laval from Italy (better known as Shein) and a member of the national team of Latvia, Janis Blooms, will play in our club,” General Director Valery Tikhonenko said, presenting the new players.

This season is expected to be a challenge as this year Astana will take on illustrious clubs like CSKA of Moscow, VEF from Riga, Red October from Volgograd, Tsmoki-Minsk and the Lithuanian Neptunas.

Head coach of Astana Bonichiolli Matteo said that the club has the strongest roster in recent years. The games will be difficult, he warned, but Kazakhstan fans can be sure that Astana will fight and win.

On Oct. 8-9, the capital’s basketball players are competing in the national championship against Kapchagay, and on Oct. 14 they will open the regular season of the VTB league on their home court against Triumph from the Moscow region.

On Oct. 2 in Athens, the Kazakh club played an away friendly match against legendary Greek club Panathinaikos, six-time winners of the Euroleague and holders of the Intercontinental Cup. The hosts won the game 73-62, while the Kazakh club came away with useful experience.