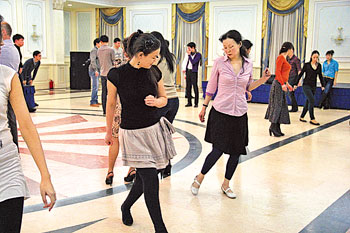 The Astana Dance Club has been sharing the joy of dance with tourists and locals over the past four years.

ASTANA – Tourists and locals who want to learn to get their groove on can drop in on free dance classes offered by the Astana Dance Club on Saturday and Sunday evenings at the Radisson Hotel.

The classes are free of charge and begin at 7 p.m. and are taught in English, Russian, and French. Instructors teach numerous dance styles, such as rock ‘n’ roll, the twist, waltzes, cha-cha-cha, samba, disco and more.

The Astana Dance Club has been sharing the joy of dance for the last four years.

“It is hard to imagine that we have existed for so long! In this period, our dance classes have evolved into a whole community as more that 100 dancers have joined us since the classes first opened,”said one of the club’s coordinators Daniyar Davletaliyev. 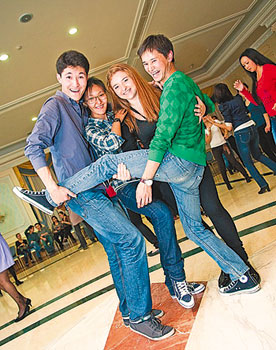 Dance classes were created by the initiative of Dr. Hubert Petit, the former deputy head of the Delegation of the European Union to Kazakhstan, and were meant to gather expats and visitors to create a social hub for non-residents of Astana. However, the dance classes are open to anyone interested in dance and getting exercise while having a great time. “If you like dancing, you can join us (at our weekend classes)and get a whole range of positive emotions,” Davletaliyev said.

The classes are taught by volunteers trained by the club. Many of the instructors started out taking the classes

“The most popular dance classes among our participants are Viennese waltz and rock’n’roll, as well as ethnic dances,” Davletaliyev noted. “But we also try to dance other styles.”

Those coming to the class can wear whatever they feel comfortable dancing in, says Davletaliyev, and students do not have to speak Russian, English or French to enjoy the classes.

“I would also like to mention that an inability to speak any of these languages is not a reason not to come or be afraid to participate in our classes, as dancing is another kind of language that is understandable all over the world.”