By Bakytzhan Omarov in Nation on 9 October 2013

ATYRAU – With a sense of excitement and accomplishment, Chevron Eurasia officially started business at its new Valve Plant (AVP), Atyrau, a $40 million facility that is unique in Kazakhstan and other CIS countries. 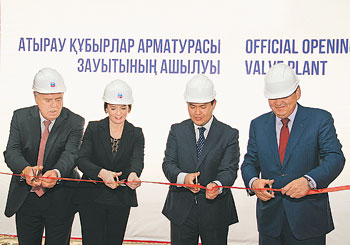 The new plant has capacity to produce 30,000 valves per year ranging from 80 to 400 mm in diameter, with nominal pressure up to 16 bar, and will employ more than 70 workers from Atyrau who will manage and operate the facility.

In addition to Kazakhstan’s domestic market, AVP has the opportunity to export its product, a strategy that is strongly aligned with government efforts to expand and diversify Kazakhstan’s industrial potential.

AVP’s gate valves are highly competitive as a result of new manufacturing technology and materials such as rubberized wedge, corrosion resistant coating, as well as efficient installation. The product is especially attractive because of its 50-year service life and compatibility with products manufactured by the APPP.

In addition to the economic diversification provided by AVP, Chevron is evaluating the potential of a wind park project in Akmola oblast. The project will be the first Chevron facility to generate wind power outside the United States and one of the first wind parks in Kazakhstan.

Chevron was the first major Western oil company to invest in Kazakhstan and has been actively involved for twenty years developing the counties oil and gas resources. Lead by its investment in Tengizchevroil and Karachaganak, Chevron and its partners have created thousands of jobs, provided billions of dollars of investment, developed the local workforce, and supported medium and small businesses and numerous local communities.