After a strong homestand to start the season, Astana’s Barys Hockey club recently completed a successful road tour, winning three out of four away games and scoring 15 goals. 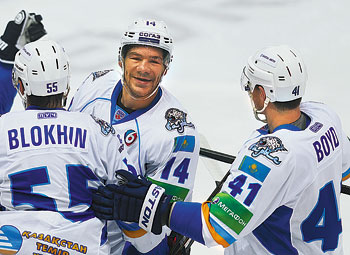 A successful road tour of Astana’s Barys Hockey club has built some momentum for the team to continue to work and get better.

Barys lost only one game in their road tour against Croatian Medveščak 2-3 and were in control of most other games they played. In the game against Donbass, it was Barys’ Dustin Boyd’s and Fedor Polishchuk’s lines that scored. In the Minsk game, it was Barys’ Brandon Bochenski’s line that scored with a hat-trick and in the game against the Moscow Spartak, it was the fourth line that stole the show with scoring by Josh Gratton. After the game, Gratton jokingly said that he intends to score as many goals as Brandon Bochenski.

After the game against Spartak, Barys claimed the top ranking in the KHL for the first time and beat the league’s scoring record for the first 10 matches of the season. Well-known sports website www.championat.com called Barys the biggest surprise of the season.

Barys forwards Talgat Zhailauov and Nigel Dawes are among the league’s goal scoring leaders, Zhailauov also has the most assists in the league and defenseman Michael Lundin is the KHL’s current most valuable player. Lundin and center-forward Nikolay Antropov were also named among the league’s best defensive forwards for September.

On Oct. 2, Barys played its first match in October at its home arena against Vityaz from Podolsk The Barys upcoming home series includes some of the KHL’s best teams, including two-time winners of Gagarin Cup Moscow Dynamo and Kazan Ak Bars. Following its own home series, the Astana team will go on in Eastern tour, including games on the Pacific coast of the KHL.