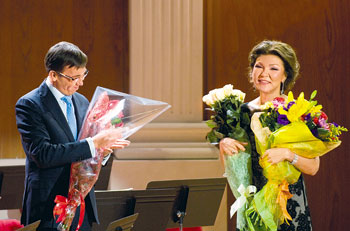 Dariga Nazarbayeva was presented with flowers following her performance at the opening of the new Astana Opera hall on October 1.

ASTANA, Sept. 30 – The grand opening of the chamber hall of the Astana Opera will take place on Oct. 1, International Music Day. Mezzo-soprano Dariga Nazarbayeva, also a member of the Mazhilis of Kazakhstan’s parliament and chairperson of the Committee for Socio-Cultural Development, will perform, accompanied by pianist Timur Urmancheyev.

At the gala concert dedicated to the opening of the chamber hall, violinist and People’s Artist of Kazakhstan Ayman Mussakhodzhayeva and Honoured Artists of Kazakhstan baritone Talgat Mussabayev and tenor Zhan Tapin will also perform, as well as the State Chamber Orchestra Academy of Soloists and soloists of the Astana Opera. Chief director of the programme is Honoured Artist of Kazakhstan Bakhytzhan Mussakhodzhayeva; the art director is Ayman Mussakhojayeva. Aidar Torybayev, chief director of the Lviv State Philharmonic, will also take part in the concert.

The programme will include music of the Baroque period. Pieces by Handel, Bach, Vitali, and Vivaldi will be played. The grand opening is by invitation only. 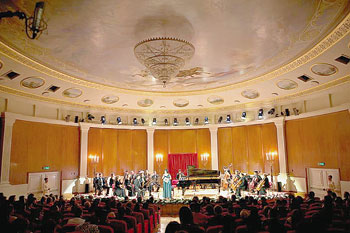 The hall has 250 seats and is intended for chamber music performances. It features a hand-painted ceiling by Italian artists.