By Alina Usmanova in Culture on 11 September 2013

ASTANA – The upcoming theatrical season at the recently opened Astana Opera and Ballet Theatre will showcase young talents in a number of leading roles. 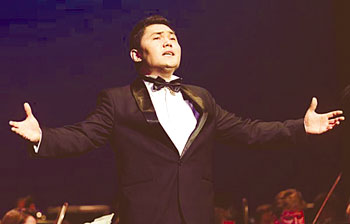 Young tenor Medet Chotabayev will be performing in the upcoming season at Astana Opera.”

Young tenor Medet Chotabayev, who will be performing at Astana Opera, has already won the Art of the 20th Century international competition in Finland, first prize and a special prize for best tenor at the Glinka International Competition of Vocalists and third prize in the first Best Voice of the Future international opera competition in Paris. He spoke to The Astana Times about the beginning of his career, the reality of life as a performer and his experiences as an artist and Kazakhstan’s citizen abroad.

You have performed on world stages and in international competitions. What is the difference between foreign and domestic musical facilities? What are the prospects for Astana Opera?

Europe is the birthplace of opera and attracts the best singers of the world to learn, work and act there. It is believed that if you sing in Europe, then you are at a high level. But I would not say that we have a low level in Kazakhstan. We have good voices, good musicians and singers. With the establishment of such a wonderful theatre as the Astana Opera, we have got more opportunities to express ourselves. Now there are many events in the theatre: the management worked in cooperation with the Teatro ala Scala (from Milan), the Bolshoi Theatre (from Moscow), the world’s theatres. The whole musical world is being formed, there is no need to go somewhere abroad; the teachers will come and teach our artists and we will listen to them, see how they work. And take something for ourselves. Of course, we will grow with the acquisition of new knowledge and skills.

What is the foreign teaching approach?

You know, when I go to Italy, I hear people say that I am very well prepared in terms of technique and vocals, but not prepared for performance. This is understandable: I’m Kazakh, not an Italian. Unfortunately, we are not taught how to express a character. I am not talking about Kazakh music, I am talking about Italian and German. You need to know the language and live in the atmosphere, maybe study there for some time and adopt their manners.

Do you have a most memorable performance?

Yes, it was the Glinka competition. I had to pass through a lot of difficulties. I did not have the financial ability to go there; I found sponsors, but at the last moment they abandoned me. Only my teacher, Beken Bekenovich Zhylysbaev [People’s Artist of the USSR, professor and veteran of the Great Patriotic War], supported me. He is now 90 years old. I am very happy he taught me. He gave me his money he was saving for his retirement. And he said, “Go and buy a ticket, go. Otherwise you would regret. It does not matter what happens there.”

I knew it was a very difficult international competition in Moscow and the best singers from all over the world came there. I was lucky, I passed the first round, the second and the third. I decided for myself that it would be enough if I received a certificate. And then I found out that I took first place. I received the Kozlowski prize as the best tenor of the contest. I brought the victory home, I called my teacher; tears came into his eyes. I am grateful to all the people who helped me, who still help and support me. And I am very grateful to the Almighty that there are only good people in my life. After this competition I started to receive offers; they even wanted to draw me over to Russia, to Moscow, but I did not fall for them. I like to live in Kazakhstan, my family is here.

How does an opera singer start his day?

Each day starts in a different way, and I always have fun. When I lived in Almaty, all the neighbours knew me in absentia and directly. And when I was leaving on tour, they all knew that I was not home, because it was quiet. But I start the real musical life when I cross the threshold of the theatre. At home, I think, read, learn new songs and performances and, of course, try to relax.

When did you find out that you have musical talent?

Since I was 15 I have listened to Luciano Pavarotti. I always wanted to sing like him. I have loved singing since childhood. I sang folk songs – Russian folk songs, Kazakh folk songs, pop songs. I sang just for myself, not for the public. When I finished the ninth grade I told my mother that I wanted to be a singer. My father reacted badly because he did not consider music a valid profession. And my mother, as always, supported me, and I went and I did it. You know, if I was born a second time, I would probably become an opera singer all over again.

Have you thought about a family?

My heart is now free. I need to get steadier on my feet; after that I will think about a family.

What is the main thing in life for you now?

The main thing is being alive and well. The main thing in art is not to stop, to go ahead and not to be tired. Love and falling in love should be for making life more interesting.

What’s the key to your success?

The key to my success, I think, is the presence of enormous patience. An opera singer’s job is very complex … Some reach success quickly, but then quickly it disappears. And others grow slowly, but with quality. Now, the world of opera is not like it was before. Many viewers do not go to the opera. In Kazakhstan, Astana, I think everything will be fine, I will do everything that I can. I am very happy that I am here; I will support my country, my profession. Sometimes, though, I think I’m not a singer; I just love music. I advise new singers to do more, be patient, not give up and not get tired, to work on themselves.