ASTANA –Unified National Testing (UNT) was introduced to Kazakhstan’s educational system back in 2004. The test had served as a transition test from high school to university. 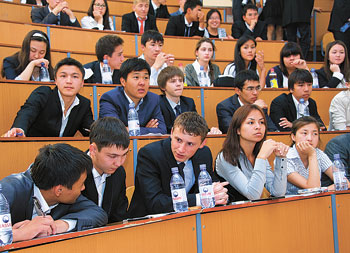 From 2015 onwards school children in Kazakhstan will have to pass two kinds of tests upon graduation.

The UNT includes five subjects: mathematics, history, Russian or Kazakh language and a subject of choice (English, French, German, physics, chemistry, geography or biology). Each subject includes 25 sections that must be completed in three hours.

In recent years, the UNT has been surrounded by controversy. In 2012,member of the Mazhilis (the lower chamber of Parliament) Dariga Nazarbayeva noted that the UNT had raised the number of suicides among teens aged 15-19, stating that there were 209 suicides in this age range in 2009 and 237 in 2010 linked to difficult test preparation and very tight security measures during the test, such as the frisking students upon arrival at testing centers. The deputy also asked the thenminister of education to report on improvements in the correlation between the UNT and suicide.

There have been mixed feelings about UNT during the whole time of its existence.

“The UNT makes it possible, to a greater extent, to make an objective determination of knowledge, since in order to answer test questions, it is necessary to know specific material. Even the authors of the test questions and experts do not know which variation will be given to whom,”Yury Grebenyuk, a history teacher and one of the authors of the UNT said in an interview.

On Sept. 18,Vice Minister of Education and Science Murat Abenov announced that the UNT is to be cancelled by 2015.

“The UNT is to be cancelled by 2015. Currently, the UNT links the completion of grade school and enrollment in university. Thepractice does not always show efficiency, as the completion of grade school indicates that the student has a certain amount of universal knowledge, while admission to university requires knowledge in certain, specific areas. It is hard to define a student’s knowledge in specific areas with the UNT,”said Abenov.

Back in 2012,Nazarbayeva had also stressed the need to have multi-faceted exams rather than one unified test.

“We will divide the UNT into two exams instead, one high school exam that is universal for all and a second exam to determine astudent’s future profession. Students will be tested on a few subjects for the school test; for university, there will be two profile subjects,” Abenov explained.

Besides the complexity of the test, students also feel pressure from being strictly watched during testing.

“Making it through airport security is easier than making it to your seat atthe test,” Zhanna Batyrbayeva, a recent graduate in Astana commented. “I wish security was not as tight, the test itself is intimidating enough! I am really happy to hear that the Ministry of Education and Science is planning to cancel the UNT.”