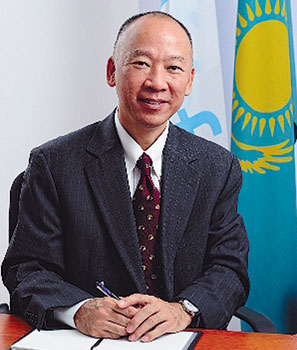 On behalf of UNICEF and others, Kukita, whose father witnessed the Hiroshima bombing, urged people to observe their obligation to develop and sustain international peace through nuclear disarmament. He promoted the idea that “every effort should be made to end nuclear tests in order to avert devastating and harmful effects on the lives of people,” based on the 1996 Comprehensive Nuclear-Test-Ban Treaty (CTBT) and the unanimously adopted 2009 GA resolution 64/35.

Kukita also said that to commemorate the annual international day this year there will be two special observances at U.N. Headquarters in New York to draw the world’s attention to nuclear weapons abolition and the goal of a world free of nuclear weapons. The first will be an informal meeting including a High-Level Panel on Sept. 5, which is expected to be opened by U.N. Secretary General Ban Ki-moon, the president of the U.N. General Assembly Vuk Jeremic and a representative of the government of Kazakhstan.

The second event will be an exhibition entitled “Peace Now: Abolish Nuclear Tests and Weapons,” which will run from Sept. 4-8 and display paintings by Kazakh artist Karipbek Kuyukov. Kuyukov is also honorary ambassador of the ATOM Project, an anti-nuclear testing campaign, and the exhibition will also depict ATOM Project activities.

Kukita also mentioned his trip to Kurchatov, in East Kazakhstan, last year, where he saw the environmental consequences of the nuclear tests conducted at the Semipalatinsk test site, which was closed permanently in 1991 by the decree of President Nursultan Nazarbayev of Kazakhstan.

Concluding his speech, Kukita noted the importance of non-proliferation. He also said ending nuclear-weapons testing cannot be emphasised enough in the international community.

“I am confident that the United Nations, together with the government of the Republic of Kazakhstan, can all come together to commemorate the International Day Against Nuclear Tests and thereby raise awareness of the human and environmental devastation caused by nuclear weapons testing,” he said.

After Kukita’s statement, he was asked several questions regarding U.N. activities in Kazakhstan. The first questions were on his attitude to establishing an international diplomacy hub in Almaty, and to Kazakhstan’s bid for a non-permanent seat on the U.N. Security Council in 2017-2018.

He was very positive about the idea of opening the hub in Almaty. “The idea is very good. And it is also very good that the government of Kazakhstan is involved in rendering assistance to the international exchange of opinions. With regard to the non-permanent seat … I can say that all of us have witnessed Kazakhstan’s ability to convene governments, civil society and other interested parties for discussions of pressing issues such as human rights and other relevant issues of the international community. The decision of Kazakhstan to participate in the U.N. Security Council through non-permanent membership is a very important step because it requires great responsibility in many issues. I hope that Kazakhstan will take this important position,” he answered.