By Polina Fedorova in Tourism on 18 September 2013

KOKSHETAU – The rapid development of the Shchuchinsk-Borovoye resort zone has transformed the Akmola region into a tourist cluster. 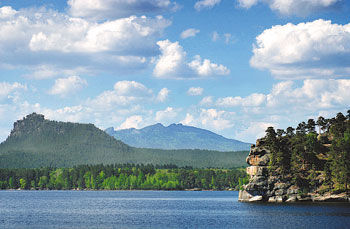 During preparations for EXPO 2017 more construction of so called ethnic villages will be implemented in resort surroundings, including in Burabay.

Burabay is often called the Kazakh Switzerland due to its clean air, pine forests and blue lakes. The beauty of the region has created conditions for the development of an active tourist center. In 2012, the region was visited by 259,700 tourists, which was 36 percent more than in 2010. The total volume of tourism services offered in 2012 increased by 53 percent compared to 2010 and exceeded 2.3 billion tenge ($14.9 million). Among the leaders of the region’s recreation industry are the Okzhetpes resort, the five-star Rixos Borovoye Hotel, Park Hotel Kokshetau and the Kazakh Lapland.

In order to create a favourable investment climate and attract domestic and foreign investors, the Burabai Free Economic Zone has been established.

Preparations for EXPO 2017 will also include the construction of ethno-villages in Tselinograd, Arshaly and Korgalzhyn districts, allowing numerous tourists who will come for the international exhibition to study the rich history, unique culture and traditions of the Kazakh people.

The key aspect of forming the tourism cluster is the infrastructure development. At present, the Kokshetau airport complex has been entirely reconstructed. Its capacity is 200 passengers per hour and the terminal is able to receive and serve modern aircraft and provide services in accordance with international standards.