The Japanese Spirit of Silk

By Diana Akhmetova in Culture on 11 September 2013

ASTANA – For the first time, a unique kimono exhibition “The world through the eyes of the Kimono Master Kubota Itiku” was showcased in Astana from Sept. 6 to 19, 2013 at the Palace of Independence, held by the Shodiyev International Foundation in cooperation with the Astana Akimat and the Embassy of Japan in Kazakhstan. 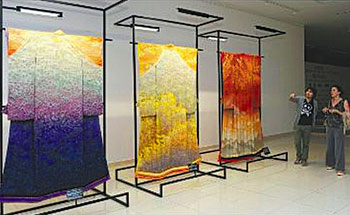 Visitors of the kimono exhibition have a unique opportunity to immerse themselves in Japanese culture and to feel its spirit and traditions.

The exhibition has become a real hit with the many residents of Astana interested in Japanese painting, and with all art connoisseurs. Alongside their ornamental nature, kimonos are quite large, about 2.5 meters long, covered with hand-painting and stitches. If you combine a number of kimonos together, they will form a single sheet, and a special landscape. The creation of each kimono requires about a year of work.

The exhibition has a lively atmosphere. It has been attended by many visitors, including representatives of the artistic community, cultural agencies and foreign diplomatic missions and embassies in Astana, as well as expats. Visitors have a unique opportunity to immerse themselves in Japanese culture and to feel its spirit and traditions. A professional guide is always available for guests to help them in getting a more profound view of the unique kimonos and the history of their creation. In a separate exhibition, visitors can also watch a documentary movie about the author and the history of this extraordinary kimono collection.

The author of these captivating masterpieces, Kubota Itiku (1918-2003), was a famous Japanese master of painting and textile. Since age fourteen, he had studied methods of decorating fabrics, landscape painting in the Japanese style and portraiture. For decades, he tried to unravel the secrets of traditional Japanese silk painting techniques of the 15 and 16 centuries, and later developed his own style called Itchiku Tsujigahana, a complex process of applying colorants, dyes combinations, needlecraft and stitches. During the Second World War, he was captured and lived in Siberia for some time where he continued to create such masterpieces; this left an indelible imprint on his creative activity. In later years in his works, he used materials such as crepe silk and synthetic dyes. He depicted various scenes on his kimonos, such as Mount Fuji, four seasons, the nature of Siberia, amongst others.

This collection received its “second life” and became well-known thanks to Farkhat Shodiyev, a successful entrepreneur, patron of art and founder of Shodiyev International Foundation, the main focus of which is to support and develop the scientific, creative and cultural potential of Eurasia.

Farkhat Shodiyev is a graduate of the Moscow State Institute of International Relations, a scholar of Japan, candidate of political sciences, history, economics and politics in Japan. It was ten years ago, when Farkhat Shodiyev for the first time visited the “Museum of Itiku Kubota” in Japan, that he was charmed at first sight by the kimonos created by the great master.

After that, in 2010, Farkhat Shodiyev saved the museum from bankruptcy and purchased the entire collection of kimonos to prevent its dismantling for the sake of world culture. Despite the fact that the collection of Itiku Kubota museum passed into private ownership, it remains the property of Japan, and Farkhat Shodiyev is ready to hand it over in the future to any Japanese museum, which will ensure the safety of the collection.