The ATOM Project Presented at UN

By Artur Abubakirov in People on 11 September 2013

NEW YORK – On Sept. 4 as part of the commemorations of the International Day Against Nuclear Tests, the Permanent Mission of the Republic of Kazakhstan to the United Nations in cooperation with the UN Department of Public Information organized the presentation of The ATOM Project and an exhibition of the artwork of the project’s honorary ambassador Karipbek Kuyukov entitled “Looking for Peace” at the United Nations. 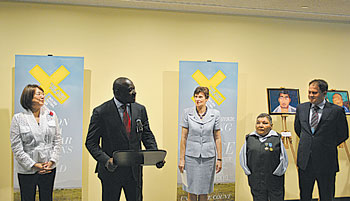 Executive Secretary of CTBTO Lassina Zerbo (speaking) noted that “there could not be a better ambassador in the area of non-proliferation and disarmament than Kazakhstan.”

A number of high level representatives, including the former head of the Permanent Mission of Kazakhstan to the United Nations and the newly appointed Kazakhstan Parliament Senator Byrganym Aitimova, Ambassador-at-Large of the Ministry of Foreign Affairs of Kazakhstan Roman Vassilenko, Karipbek Kuyukov, UN High Representative for Disarmament Affairs Angela Kane, Under Secretary General – Director of the UN Department of Public Information Peter Lansky, Executive Secretary of the Preparatory Commission for the Comprehensive Nuclear-Test-Ban Treaty Organization (CTBTO) Lassina Zerbo, as well as international experts in the field of nuclear non-proliferation and disarmament, representatives of diplomatic missions to the United Nations and international non-governmental organizations attended the event.

Presenting The ATOM Project, which is an international campaign developed to share information about the environmental and human dangers of nuclear weapons tests, and introducing Karipbek Kuyukov, Byrganym Aitimova noted that Kuyukov’s physical limitations failed to break the power of his spirit and today he fights tirelessly to end nuclear testing worldwide. “Today’s exhibition is unique not only because of the message it brings, but because of the life of the artist himself and all that he stands for,” Ambassador Aitimova said.

UN High Representative for Disarmament Affairs Angela Kane furthered that sentiment while addressing the exhibition’s participants. “Who could possibly present a more inspiring statement of the triumph of the human spirit than this gifted artist? He has not only conquered severe physical hardships as a result of past nuclear tests in Kazakhstan, he is also winning the hearts and minds of people around the world who have seen hisart and cannot better comprehend the full humanitarian and environmental consequences of nuclear tests,” she said.

It is not by chance that Aug. 29 is symbolic for Kazakhstan because it was on that day 22 years ago that President Nursultan Nazarbayev, expressing the will of the people of Kazakhstan, decreed the infamous Semipalatinsk nuclear test site be closed forever. This day, Aug. 29, became the starting point for Central Asia to reach its current status as a nuclear-weapons-free region when in September 2006, Kazakhstan and other countries in the region signed the Treaty of Semipalatinsk, which declared Central Asia a nuclear-weapons-free zone. Kazakhstan today remains coordinator of that zone and is working with the five permanent members of the UN Security Council to receive the so called negative guarantees for the zone.

Underlying this, Kane praised the decision of President Nazarbayev to close the Semipalatinsk test site in 1991. “This decision paved the way for negotiations on the CTBT,” she said.

Soon after closing the nuclear testing site, Kazakhstan decided to voluntarily and unilaterally disarm what was then the fourth largest nuclear arsenal in the world, which it had inherited from the Soviet Union. This arsenal consisted of 104 intercontinental ballistic missiles with 1,040 nuclear warheads with one megaton of TNT equivalent each, 375 nuclear tipped cruise missiles and 40 Tu-95 heavy bombers. 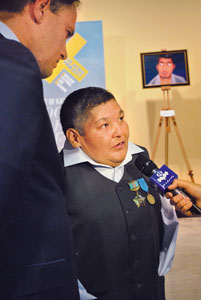 Addressing the audience, Honorary Ambassador of The ATOM project Karipbek Kuyukov once again reminded the world of the tragic consequences of nuclear testing.

Addressing Kazakhstan’s role in non-proliferation and disarmament, newly appointed Executive Secretary of the CTBTO Lassina Zerbo noted that “there could not be a better ambassador in the area of non-proliferation and disarmament than Kazakhstan. However, with all the work done there is still a long way to go in order to come to a world free of nuclear weapons,” Zerbo concluded.

The Comprehensive Nuclear-Test-Ban Treaty was opened for signing 17 years ago under the auspices of the United Nations. Kazakhstan was among the first to sign it. Since then, 183 countries have joined and 159 countries, including three nuclear-weapon states, Russia, Great Britain and France, have ratified the treaty. However, the treaty will only come into effect when it is signed and ratified by the eight countries listed in Appendix II of the Comprehensive Nuclear-Test-Ban Treaty: Egypt, Democratic People’s Republic of Korea, People’s Republic of China, Israel, India, Iran, Pakistan and the United States.

Addressing the audience, Kuyukov once again reminded the world of the tragic consequences of nuclear testing and, under The ATOM Project, called on the global community to act more forcefully to irrevocably ban nuclear weapons testing.

Kuyukov’s works, painted with his mouth and toes, portray both the terrible consequences of nuclear tests and his love for humanity.

The exhibition seemed to have a strong impact on participants with many agreeing on the importance of Kazakhstan’s initiatives in the field of nuclear non-proliferation and disarmament, and the need to implement them in order to maintain global stability and reach a world without nuclear weapons.

Many at the exhibition expressed the view that there is a need to remind the world about the tragic impacts of nuclear tests and continue to call for vigorous actions toward a final and revocable end to nuclear weapons and that The ATOM Project is an important instrument to achieving that goal.

The project allows anyone in the world who opposes nuclear weapons to sign an online petition to the governments of the world calling for a permanent prohibition against nuclear tests and the early entry into force of the Comprehensive Nuclear-Test-Ban Treaty. Many guests at the exhibition launch signed the petition.