By Sergei Gorbunov in Culture on 11 September 2013 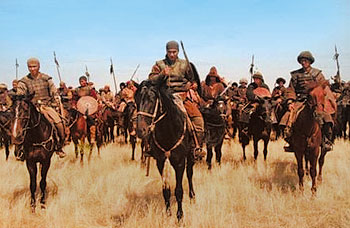 Epic battles took place in the Mai region a hundred years ago.

The area, called Kalmak kyrylgan zher, or the birthplace of Kalmak, was the site of a major victory over invading Jungar hordes. In the 18th century, Kazakh warriors led by Olzhabay Batyr defeated the Jungar hordes in a battle that began on the Bayanaul mountain pass and ended in victory at a spot that became known as Kalmak kurgan, or mound. The young participants of the excursion into history got to learn and enact the customs and traditions of that time, including riding on horseback, pitching a tent on their own, listening to tales of legendary battles and taking part in traditional games.

The trip was organised by the Pavlodar Centre for Youth Initiatives Development.