ASTANA—Kazakhstan’s 2012 Olympic boxing champion Serik Sapiyev was named UNESCO Goodwill Ambassador for Sport on Aug. 24 at a ceremony held at the Kazmedia Centre in Astana. The Val Barker trophy winner was presented with his new title by UNESCO Director General Irina Bokova. 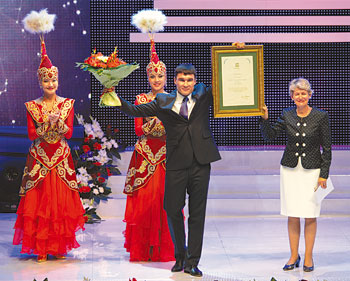 Kazakhstan officials and boxing champions as well as a number of spectators were present for the event.

A movie, “Path to Victory,” had been prepared for the ceremony. The movie showed the milestones of Sapiyev’s career: finding a boxing centre in his home town of Abay, meeting his trainer, Alexander Strelnikov, and winning world championships and the 2012 Olympics. Scenes from the London Olympics of 2012 drew applause from the audience.

“We are very pleased that our organisation will be represented by such an athlete, who symbolises the lofty ideals of UNESCO and will promote a healthy lifestyle among the younger generation,” Bokova said.

“I am very pleased to receive this honorary title, along with the other recognised athletes and champions of UNESCO in sport. I will fully support UNESCO policy for education, culture, sport and maintaining a healthy lifestyle. I know this is a very important mission, so I will be proud to be one of the holders of the mandate,” Sapiyev said.

UNESCO Goodwill Ambassadors are celebrity advocates who spread UNESCO ideals through their name and fame and draw attention to UNESCO’s work.