By Julia Rutz in International on 20 September 2013

ASTANA – Repercussions for regional security in Central Asia following the withdrawal of US-led military forces from Afghanistan and the unresolved status of the Caspian Sea continue to remain among the most important security challenges for the region, Kazakh and British experts pointed out at a recent gathering. 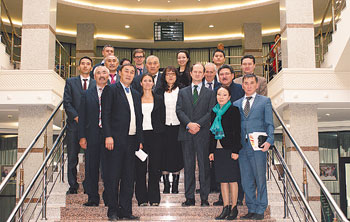 A round table organized by the Center for Military and Strategic Research was attended by Hugh Jones, head of the department of military intelligence for Central Asian countries (third from right in front row).

Astana-based Center for Military and Strategic Research held a roundtable jointly with a delegation from Great Britain under the theme Central Asia’s Security Challenges at the National Academic Library on Sept. 17. The event was attended by Hugh Jones, head of the department of military intelligence for Central Asian countries and experts from the CMSR led by its director Bakhytzhan Abdyrayim.

The two delegations discussed the main challenges Central Asian countries will face after the withdrawal of US-led troops from Afghanistan as well as the local trouble zones in the region.

Svetlana Kozhirova, a senior research fellow at CMSR, emphasized two organizations that stand for security in Central Asia in her speech. The first is the Collective Security Treaty Organization, which is an intergovernmental military alliance consisting of Russia, Kazakhstan, Kyrgyzstan, Belarus, Armenia and Tajikistan. The second organization is the Shanghai Cooperation Organization whose mission has recently shifted towards strengthening economic relations between member states rather than fighting against religious extremism, illicit drug trafficking and terrorism.

“We need to develop cooperation with one of these two alliances in order to protect the security of the country and the region. From my point of view, the CSTO is more likely to fulfill this mission because of the legal framework behind the charter of the organization and the successful military trainings and anti-drug campaigns it has executed since 2003,” Kozhirova said.

She also noted security problems in the region like the Batken district in south-western Kyrgyzstan which is embroiled in a territorial dispute with Tajikistan, in Xinjiang Uygur Autonomous District in China and in Afghanistan.

Hugh Jones and several experts from the military academy presented their points of view about how Central Asian countries should cope with regional security issues. According to Jones, the best way is to find balance between the two regional organizations without giving particular prerogative to either of them. “Talking about 2014 and the situation after US troops leave Afghanistan, I think Central Asian countries should cooperate with each other, rather than be guided by China or Russia as we should understand that these two countries have their own interests in the region,” Jones said.

Tracy German, another British expert at the round table, added that in response to the worst case scenario proposed by Kazakhstan’s experts in which Central Asia becomes a region of harsh confrontation, the region could become a good basis for cooperation between the three great powers: the USA, China and Russia. She also raised the problem of resolving the status of the Caspian Sea (answering the question whether it is a sea or a lake) and the way the body of water should be divided between the bordering states and the militarization of this area.

Kozhirova, in response, pointed to the understandings between Russia, Kazakhstan and Azerbaijan who signed agreements according to which they divided the northern parts of the Caspian Sea into sectors along the median line. At the same time, Iran continues to insist on receiving the one fifth share. The position of Turkmenistan is uncertain, the country agreed with the division proposed by Russia, but it has several territorial disputes with Azerbaijan that are still unsolved. In connection with this, the situation has not changed but some experts expect that the new Iranian government will change their previous position and will finally put the dialogue into motion, Kozhirova added.

Both delegations agreed that Kazakhstan should continue using the Caspian Sea as an oil and marine resource source and not engage in efforts to militarize the body of water.