By Natalia Kurpyakova in Culture on 20 September 2013

ASTANA – Kazakhstan’s first rock opera, “Zheruiyk” (“Promised Land” in Kazakh), was performed recently to a packed house at the Palace of Peace and Accord in Astana on both nights of September 14 and 15. 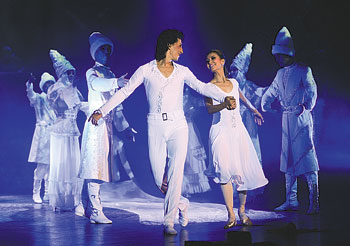 “Zheruiyk” (“Promised Land”) is the first Kazakh rock opera based on a famous Kazakh legend about steppe philosopher Asan Kaigy who went to search for the promised land.

The opera’s music was written by popular composer Tolegen Mukhamedzhanov and the libretto was written by well-known poet Kadyr Myrzaliev. Production director Yury Aleksandrov and art director Vyacheslav Okunev from St. Petersburg, who made significant contributions to “Zheruiyk,” are well known to the Kazakhstan audience.

The rock opera “Zheruiyk” has its own story of creation.

“In 1979, Murat Kussainov asked me to compose a song in the genre of rock,” Mukhamedzhanov said at a press conference. Murat Kussainov was and is the leader of the Dos Mukasan musical group.

“Dos Mukasan was popular at that time. In the spring of 1980, the group premiered a rock opera in the concert form in Alma-Ata and performed it numerous times over the following two years. Eight years ago, Kussainov offered to repeat it. A remix was created and recorded with other artists. This year, the remix was updated and now it is a real drama performance with a ballet group participating in the performance,” Mukhamedzhanov, who is now the director of the new Astana Opera and Ballet Theatre, added. 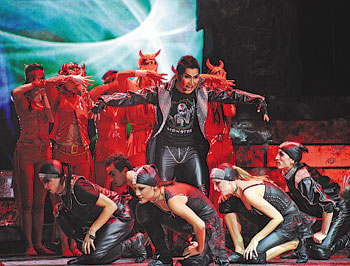 The Zheruiyk rock opera staged at the Palace of Independence earned rave reviews.

The performers in this version of “Zheruiyk” are Nurlan Onerbayev, Bauyrzhan Issaev, Svetlana Vasina, Bauyrzhan Nurymbetov, actors from Astana area theaters, as well as dance troops Terra and Naz.

The rock opera “Zheruiyk” is based on a famous Kazakh legend about steppe philosopher Asan Kaigy who witnessed death and disasters and went to search for the promised land Zheruiyk where all people could be happy.

After loading up his camels, Kaigy searched the entire Kazakh steppe. In the rock opera, Kaigy finds the promised land in the center of ancient Saryarka, which is now a UNESCO World Heritage site and includes some of Kazakhstan’s most beautiful steppes and lakes. It is also where the country’s capital of Astana is located which is viewed as a symbol of renewal of the people of Kazakhstan.