By Nadezhda Khamitova in Sports on 11 September 2013

ASTANA – Construction officially began on Aug. 22 in Pavlodar on the Sports City Olympic Village, which will serve as a centre for the preparation and training of Kazakhstan’s Olympic athletes. The village will include an athletics arena, a palace of martial arts, an indoor soccer arena for 5,000 spectators, a 50-metre pool with diving boards and a racetrack. 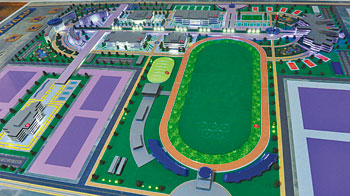 Sports City Pavlodar will not only train future champions, but also become a venue for international competitions.

In an interview with local media, Head of the Physical Education and Sport Department of Pavlodar Akimat Rakhmetolla Kaskyrbaev said, “We had to overcome a lot of barriers; the scepticism of people. Today, we proceed with the construction of a swimming pool which meets all Olympic standards and a race track for 2.5 million viewers. Sports City Pavlodar will not only train future champions, but also become a venue for international competitions.”

“The village should meet all Olympic standards. We will do our best to achieve this goal, so not only every athlete of Kazakhstan but also every citizen of Kazakhstan will be proud of these facilities built within the country,” Sport City’s Chief Engineer Almas Baydildin commented about the construction.

Head swimming coach of the region, Lev Akopov, said he could not even dream of such conditions for swimmers. “I am very grateful for this gift to our swimmers. I want to say that from our side, we will try to do our best and bring up as many athletes of international class as possible,” he said.

The complex will be located on an area of 100 hectares. In addition to sports facilities, a hotel and cafe for athletes, a walking and biking area and parking facilities will be built on the site. The new sports complex will also be equipped with an indoor hall for winter sports.

Another facility now under construction and officially presented to journalists is the Kulager racetrack, which is designed for 2.5 million spectators. It will also have its own training camp and mini-horse farm.

In August of last year, Akim (Governor) of Pavlodar region Yerlan Aryn officially announced that a winter arena would be built in honour of Kazakh speed skater and bronze medallist at the the 1998 Olympic Winter Games in Nagano, Lyudmila Prokasheva.