Vincenzo Nibali, 28, leader of the Astana PRO Team, gave up the lead to Christopher Horner, 41, after stage 19, leading the Grand Tour at Vuelta for 13 stages out of 21. After the final 21st stage of the prestigious Spanish Vuelta Grand Tour that ended on Sep. 15, Horner finished ahead of Nibali with a 37 second margin. 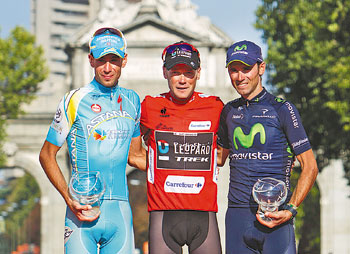 Vincenzo Nibali (left) with his main rival Christopher Horner who finished ahead of the leader of the Astana PRO Team with a 37 second margin.

Chris Horner is now the oldest ever Grand Tour winner to this day (41 years, 327 days) and the first American to win at Vuelta. After the 19th stage Horner gained a 3 second lead over Nibali coming back from a 28 second deficit, and did not give up his Red Shirt of the leader to the final 21 stage only increasing overall lead to 37 seconds.

“Of course, nobody expected Chris Horner to show such great result,” said Astana PRO Team director Giuseppe Martinelli analising the Spanish Tour. “The main rivals were thought to be Rodriguez and Valverde, and Vincenzo easily handled them. Perhaps we should have paid more attention to Horner, but no one saw him coming. It could be anybody, we can’t foresee this kind of surprises,” he added.

“Horner is a great cyclist,” admitted Nibali. “But it was hard to beat him, as he was setting new records at each stage. I do not think it was possible to beat him with given conditions [at Vuelta]. Although we did not win, we still feel like winners,” he concluded.

After Vuelta, Nibali is now 4th overall by UCI rankings with 474 points. And ASTANA PRO team, having finished second in the race, is now in the fifth place.