By Nadezhda Khamitova in Culture on 11 September 2013 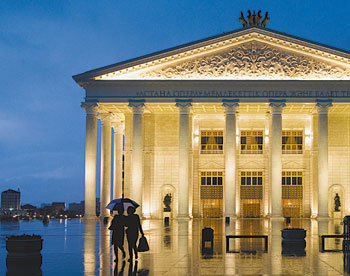 ASTANA – Kazakhstan’s new opera hall, Astana Opera, announced on Aug. 13 that it would like companies to bid to sell the opera house the instruments it needs to put on world class performances.

Astana Opera plans to purchase 11 pianos, five baby grand pianos, 11 concert grand pianos of various sizes, five string basses, a five-piece set of kettledrums, a set of bells and a conductor’s music stand. The hall’s rehearsal rooms are large so there is a need for pianos of comparable relative size. Mid-sized pianos will be put in artists’ rooms.

The requirements for these instruments are high. They should be produced by famous brands like Bluthner, Steinway or Yamaha, the manufacturer must have 100 years’ experience in the production of musical instruments and the instrument should be recognisable to leading international performers. Stringed instruments are required to have been produced no later than 1950. The purchasers are looking for well-established sound characteristics.

According to Astana Opera Musical Director Abzal Mukhitdinov, “The instrument can be nicely done, but if (the maker) does not know how to work with wood, in professional terms, then no musician will play on it. Therefore, we choose masters who know the ins and outs of the business. Let’s take deck of a grand piano as an example; it amplifies sound and reflects the full range of frequencies. For such a tool to produce the desired result, the tree (which grows only in certain areas of the world) will have been soaked for years in water enriched with natural ammonia. After that, it will have been dried for years at a certain temperature, under a certain pressure. This processing technique is used to achieve the characteristics needed to produce the full range of harmonic frequencies. This is a very sophisticated piece of technology and all this is handmade, each piece is carefully balanced, made by the master, using old and new technologies.” The production process for this kind of instrument lasts nine months. Astana Opera’s instruments will also be chosen taking into account the climate of Kazakhstan, including its humidity.

The new opera house has already held a number of performances, including a large-scale production of “Sleeping Beauty” that coincided with the Astana Day festivities in July. Purchasing its own instruments will allow the opera has to hold similar events on a more regular basis.