ASTANA – Kazakhstan President Nursultan Nazarbayev in his address to a session of the G20 summit held in St. Petersburg on Sept. 5-6 explored the causes of the ongoing global financial crisis, including the growth of bubbles, and stressed that the positions of most developing countries are not taken into account when taking the world’s most important decisions. 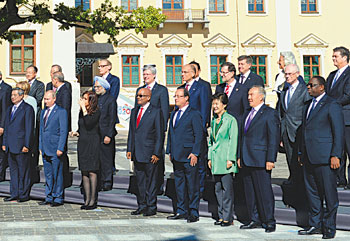 The causes of the ongoing global financial crisis were raised by President Nursultan Nazarbayev in his address to a session of the G20 summit.

“In order that voice of such countries as Kazakhstan be heard, two years ago I initiated the project G-GLOBAL. This is not an alternative to the G8 and G20, but an additional tool of global dialogue, which is being realised as an information and communication platform,” Nazarbayev said, who also used the opportunity to meet with a number of heads of states and international organisations.

In addition to G-GLOBAL, Astana also hosted the UN World Anti-Crisis Conference, which drew participation from the heads of the economic ministries of 104 countries. These innovative global interactive formats, as well as global monetary and financial architecture that represents the interests of all countries, are pathways to solving the current crisis, Nazarbayev said. He cited the Customs Union of Russia, Kazakhstan and Belarus as an example of positive regional integration. He also proposed balancing the debt ratio in the global economy. “It is proposed to develop and introduce new elements to regulate and control the volume of state and corporate debt,” he said. He also asked for support for Kazakhstan’s bid to accede to the World Trade Organisation, now in its final stages.

At the G20 summit, Nazarbayev also held meetings with the heads of foreign states and international organisations. A meeting with UN Secretary General Ban Ki-moon addressed a wide range of multilateral cooperation, as well as topical issues of regional security. Nazarbayev noted that Kazakhstan is an active participant in and supporter of the UN.

“Together we have done a lot in the field of nuclear disarmament and non-proliferation of weapons of mass destruction. We are grateful for the support of the initiative to declare August 29 the International Day Against Nuclear Tests. Besides, we are actively involved in the programme to develop a green economy and are working in this direction,” he stressed.

He also noted Kazakhstan’s initiative to establish a UN regional diplomacy centre in Almaty and said that all the conditions will be provided for its operation.

Nazarbayev also stressed that all international problems should be solved based on the principles of international law and with the participation of the UN, especially issues of war and peace.

In turn, the secretary general expressed appreciation for the meeting. “I believe that the invitation of Kazakhstan to the G20 summit is an absolute recognition of the success and achievements of the country in economic development, the growth of its international role, as well as evidence of its role in global economic issues. You have made Kazakhstan a country that plays an important role in regional security and this has been achieved thanks to your leadership,” Ban noted.

The secretary general congratulated Kazakhstan on its achievement of the Millennium Goals and the resolution of a number of large-scale economic tasks.

President Nazarbayev also held a meeting with Director General of the WTO Robert Azevedo, during which they addressed issues of Kazakhstan’s accession to the WTO and discussed the progress of signing consensus documents. Nazarbayev reported on the ongoing negotiating process over issues with Kazakhstan’s major trading partners the European Union and the United States.

President Nazarbayev’s bilateral meetings with President of Senegal Macky Sall, President of France Francois Hollande, Prime Minister of Spain Mariano Rajoy, Prime Minister of the United Kingdom David Cameron and other leaders of G20 countries tackled issues of bilateral cooperation, including in energy, sports, trade and investment; as well as deepening partnerships and resolving topical international issues. Nazarbayev also met with President of South Korea Park Geun-hye. They discussed the implementation of agreements reached during former President Lee Myung-bak’s visit to Kazakhstan, the development of the strategic partnership between the two countries and key aspects of bilateral cooperation.

Nazarbayev noted the traditionally close cooperation of the two countries and Kazakhstan’s goal of further developing the relationship.

“Today, the countries are involved in intensive cooperation in trade, economic and investment fields. Active work was carried out with former President Lee Myung-bak. A Korean company is involved in the construction of a thermal power plant in our country. A number of projects in engineering and petrochemical spheres are being implemented. In addition, intergovernmental commissions on economic cooperation are working actively, which has resulted in an investment portfolio amounting to about $8 billion. The 120,000 Kazakhstan citizens of Korean origin are a very good bridge to further strengthen cooperation between the two countries,” he underlined. Nazarbayev congratulated the new president on her election and invited her to pay a visit to Kazakhstan, which Park said she would surely do.

“We are pleased to congratulate Kazakhstan of the forthcoming Astana EXPO 2017. We have experience in organising such events, particularly in the city of Yeosu, which we are willing to share,” Park said.

She also emphasised Nazarbayev’s special role in the dynamic development of his country and his international prestige and activities promoting the abolition of nuclear weapons.

Kazakhstan was invited to the summit as a representative of the Eurasian Economic Community (EurAsEc), the Customs Union and the Commonwealth of Independent States (CIS).

Upon the results of the G20 meeting, the G20 countries expressed certain commitments in the St. Petersburg declaration. The G20 leaders agreed to create a network of experts on the refusal of entry of corrupt officials. The declaration also states the adoption of high-level guiding principles on rendering mutual legal assistance. The next G20 Summit will be held in Brisbane, Australia in November 2014.