By Asset Kalymov in Business on 11 September 2013 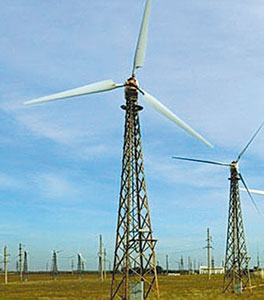 The production of wind turbines is now recognized as the unique project and will be presented at EXPO 2017 in Astana.

ALMATY REGION – An enterprise to produce wind turbines has been launched in the Karatal district. The project is being implemented by the Zhetysu social entrepreneurship corporation and about 160 million tenge (about $1 million) has been allocated from the regional budget for it.

According to Marat Oserbaev, Zhetysu’s chairman of the board, the advantage of the project is in saving money. The construction of a 30-kilometre power line requires 30 million tenge (about $196,000) but a wind turbine costing 1.5 million tenge (less than $10,000) could generate the required energy on site. Farmers will be able to buy them through support programmes stemming from the Employment Road Map 2020.

It is planned that the project will produce up to 10 units with a capacity of two kilowatts (kW) each every month. A similar unit with a capacity of five kW and above is being developed. A mini wind power plant has been tested on a number of farms and aroused great interest among entrepreneurs in the Zhambyl, Atyrau and Karaganda regions. The plant works at a wind force of not less than three metres per second and is also equipped with solar panels for periods of calm weather.

The developers are offering to install the innovative equipment at all livestock seasonal meeting points. This unique project is recognised as one of the scientific and technical achievements of the Almaty region and will be presented at EXPO 2017 in Astana.