By Raushan Shulembaeva in Culture on 11 September 2013 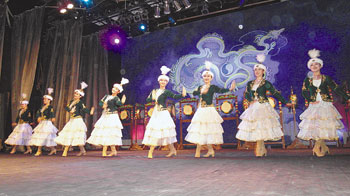 The concert brought together representatives of ethno-cultural centres and lovers of Korean culture in an ethnic celebration of an important national holiday for the young, multi-ethnic country.

“The Constitution has provided equal rights for members of all ethnic groups that make up the united people of Kazakhstan, and this is its highest value,” said Mazhilis Deputy Roman Kim, one of the event’s honoured guests. Congratulating the guests and artists on the holiday, Kim said that Kazakhstan’s steady and successful development had led to the emergence of “the Kazakhstan way of development” as a new concept in international political studies.

The concert showcased samul nori, a type of traditional Korean music played on four traditional instruments representing the elements of a storm. A ballet troupe also performed, accompanied by drumming that evoked the sounds of nature as the dancers incorporated fans and other props into their storytelling.

Celebrating the national holiday, soloists Alena Zoe Kim, Ilona Ten, the trio of Stanislav, Veniamin and Maya Lee invited the audience to sing with them.