The Kazakhstan national kokpar team won the first Asian Championship held at the Kazanat racecourse in Astana from Sept. 10 to 15. 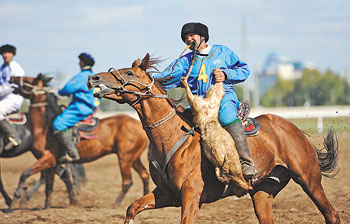 An ancient equestrian sport similar to polo named kokpar is now reborn in the frames of the Asian Championship.

Kokpar is an ancient equestrian sport similar to polo, in which teams on horseback try to advance an object toward a goal. Instead of using a ball, kokpar players try to advance a headless goat carcass. The player’s task is to grab the goat carcass from the ground and push or throw it into the goal of the opposing team.

The championship aims to preserve kokpar as part of the rich cultural heritage of the peoples in Eurasia. The game has been regaining popularity in the late 1990s.

The teams were divided into two groups. Tajikistan and China took second place in their groups and battled each other for third place overall. Tajikistan claimed the bronze medal with a 3-0 victory.

Organizers hope to hold the Asian Championship every two years and to promote kokpar in Europe and the Americas. The next tournament will be held in Turkey.