By Nadezhda Khamitova in Sports on 24 September 2013 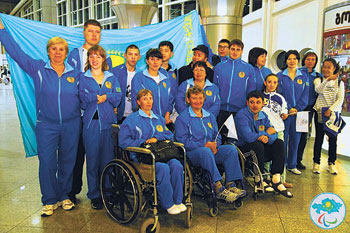 Kazakhstan’s athletes returned from The Netherlands with a major haul of 26 gold, silver, bronze medals.

Commenting on Eremenko’s achievements, his trainer and Kazakhstan Swimming Coach Vladimir Zagorodnyi told The Astana Times, “I am proud of his achievements, he is already an International Master of Sports. This time we had hoped to win even more medals, but the competition was tough, and he didn’t have enough time to relax after the previous race before he had to go on the next start.”

“We will continue trainings as soon as Mikhail recovers from this competition. In the future, we are looking to bring gold medals from the upcoming Asian Games and to win an Olympic bid to Rio 2016,” he said.

Almaty athlete Ravil Mansurbayev won gold medals in the two disciplines: the discus and shotput. Teammate Pavel Sidorchuk from Kostanai also achieved first place in shotput on the first day of the competition.

One of the games’ most noteworthy performances was by Kazakhstan athlete Zulfiya Gabidullina who competed in six disciplines and won medals in each, including four gold and two silver medals. She also set three new world swimming records in the 50 metres, 100 metres and 200 metres freestyle. Gabidullina is also the most decorated member of the delegation. She was born in 1965 and is a resident of Taraz in southern Kazakhstan. Gabidullina is an International Master of Sports of Kazakhstan in swimming. She has won medals at the 2011 IWAS World Games, Sharjah (UAE), the 2012 British International Disability Swimming Championships 2012, Sheffield, Great Britain and the 2013 International Championships in Esbjerg, Denmark. She is ranked among the top eight physically-challenged swimmers in the world and is the world’s fourth-ranked physically-challenged winner in the 50-metre freestyle. She is also ranked fifth in the 150-metre complex, fifth in the 100-metre freestyle and seventh in the 50-metre backstroke.

IWAS organizes World Games biennially. Previous Games were held in Bangalore, India in 2009 and in Sharjah, Dubai in 2011. The event’s 500 athletes and 200 trainers from countries such as Great Britain, Germany, Russia and Spain made this year’s games one of the largest sporting events ever held for physically-challenged athletes.

According to the IWAS website, “the IWAS World Games programme is particularly important to the Paralympic movement, ensuring a Games environment that will provide qualification opportunity in a wide range of sports.”

Participation of the Kazakhstan team in the games was supported by the National Paralympic Committee of Kazakhstan with financial support from the Samruk Kazyna National Welfare Fund.