By Dmitry Lee in International on 19 September 2013

The Kazakh-Afghan Intergovernmental Commission for Trade and Economic Cooperation met in Kabul Sep. 16-17 to deepen economic relations between the two Central Asian countries. 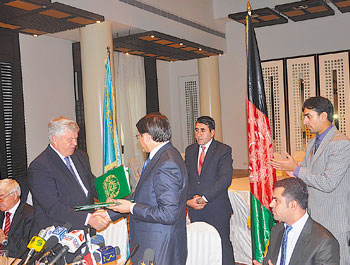 A wide range of promising spheres of cooperation for 2014 between Kazakhstan and Afghanistan was discussed during the recent meeting in Kabul.

The head of the Kazakhstan delegation also met with Afghan Vice-President Karim Halili during the visit to Kabul.