By Tomasz Peta in Dialogue of Civilisations on 25 September 2013

During a state visit to Kazakhstan on Sept. 22-25, 2001 Pope John Paul II repeatedly expressed words of blessing for the country and people of Kazakhstan. The Pontiff also pointed to a task ahead of our country. “Kazakhstan, you have the mission of being a bridge between religions, between nations and continents,” he said.

The bold and noble initiative of our President, Nursultan Nazarbayev in Astana on the organization of the Congress of World and Traditional Religions is a kind of echo of the prophetic words of John Paul II. 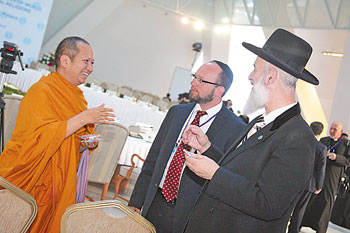 The spiritual leaders who participated in all of the congresses in Astana have vividly demonstrated that dialogue, mutual understanding and respect are strong forces capable of ensuring harmony and security in the world.

The Pope’s visit in 2001 took place in a very tense international atmosphere. Eleven days before the arrival of the Pope in Astana, four infamous terrorist attacks took place in the United States. The world trembled at the thought of a possible international military conflict.

Today, 12 years later, the international situation is even more tragic. It is enough to remember the victims of conflicts in Afghanistan, Iraq, Syria, Egypt and many other places around the globe. In tiny Syria, about 100,000 people, including 7,000 children have already died. Bearing in mind all of this, we shall thank God for the fact that multinational Kazakhstan is a peaceful home for its citizens. In addition, our country has become the author of many political and social projects focused on peace and harmony.

The Congresses of Leaders of World and Traditional Religions, initiated by our President, have already been held four times in Astana; they are a truly interactive platform. I recall the words of Pope John Paul II: “Kazakhstan is the land of convergence.”

Of course, the congresses of religious leaders cannot solve all world problems. Clerics are not able to make political decisions. However, the congresses teach people of different nationalities and religions to be together and go on the path of dialogue. They teach respect and responsibility before God and history for the betterment of the ever shrinking global village.

The congresses have also called attention to the importance of religion in the life of each individual and society as a whole. The eternal truths of religion teach people how to use the freedom that God has gifted to each. The freedom is given to people in order for them to do good things, this is a space for the good. A person who believes that he is free to do anything he wants quickly becomes a slave of evil.

Eternal truths teach that a person should be built “from the inside” through the proper use of freedom. This is a difficult, but also most beautiful thing. Material structures, such as the development of towns and villages, industry and healthcare are very important and necessary things. At the same time, the ability of one’s inner man to responsibly love life, family, his people and his country, is needed. The prospect of eternity indicated by religion helps us to better perform our secular tasks. 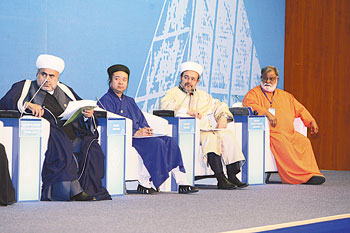 “The small Catholic population of Kazakhstan (about 150,000) is trying to participate in the ongoing construction of peace and harmony for the entire country. We try, in word and deed, to remind others of the sanctity of every human life, from conception to death. We teach and practice good relations with people of other religions, always teaching respect and love for everyone.

Since 2002, twenty-four-hour prayers for Kazakhstan’s intentions and world peace have been taking place in the Cathedral of Astana for the memory of the visit of John Paul II. At the end of June 2013, the “Star Kazakhstan” altar of worship arrived in Astana. It is intended for the curacy in Ozernoe in the North Kazakhstan oblast (it will move there in July 2014), which will be a place of prayers for peace. This is the second such place in the world (and the second Altar) after that in Jerusalem. Upon the initiative of the European Community “Regina della Pace”, there will be 12 such places in the world. Perhaps it is no coincidence that Kazakhstan has become the second one.

Twelve kilometres from Ozernoe – the place of special prayers for peace, – a structure was constructed by local Catholic parishioners in 1998 with the consent of the local authorities, located on the Ahimbettau hill (Volyn hill). The inscription on the base of the structure, in Kazakh, Russian, German and Polish, reads:

With these words, we ask God that Kazakhstan, under the leadership of our respected President, follow the path of peace and harmony, and by its example, teach all nations that in the path of peace, much can be achieved, and on the path of war everything can be lost.

The author is Archbishop Tomasz Peta, Archbishop of the Roman Catholic Archdiocese in Astana.