In the spirit of Astana

By Yuri Novgorodov in Dialogue of Civilisations on 25 September 2013

September 23 is the 10th anniversary of the first Congress of Leaders of World and Traditional Religions, Astana’s international inter-religious forum. Apparently, it was pleasing to the Most High to make me part of that event and others over the past 10 years. I have the great honour of representing the World Lutheran Association, which unites about 70 million believers across the globe, in the working bodies of the congress.

Looking back, there have been a lot of events. Now, after holding four congresses, we have worked out a clear and coherent system for conducting them. But back in 2003, every step was full of questions: How should we meet? How should we communicate? How can we nurture, how can we solve? All this created a certain tension and suspense. 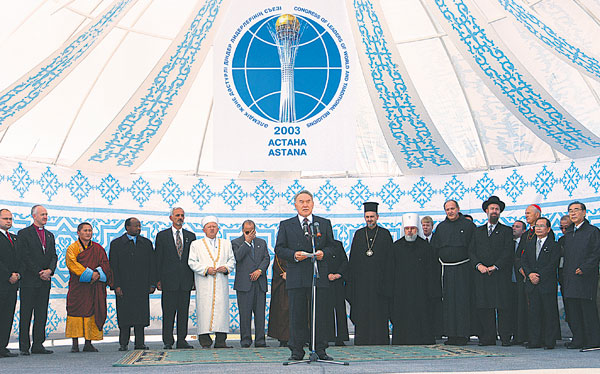 President Nursultan Nazarbayev speaks at the closing ceremony of the first Congress of Leaders of World and Traditional Religions in 2003 in Astana.

But there was still the most important mystery: How would leaders of international religious organisations react to this initiative? Would they accept the invitations sent to them or send polite letters approving of the initiative, wishing us success and regretting that they wouldn’t be able to attend? This concern extended to all involved in the process of preparation, from the Presidential Administration, Parliament and the Ministry of Foreign Affairs to, of course, the heads of Kazakhstan’s religious associations. For each association, this was also a unique opportunity to meet with their spiritual leaders.

Here I would like to mention the hero of the occasion. Often, our memories of significant events are associated with specific persons or places. Well, our congresses will always be associated with the personality of our president, Nursultan Nazarbayev, and our capital, Astana. This is not mere Eastern etiquette with its tradition of praise for rulers, but a statement of fact: after all, the invitations were sent on his behalf. Getting an invitation from a president acting consistently with peace initiatives, a president who had confirmed the seriousness of his intention to abandon nuclear weapons – this was respectable. It meant a lot for the first congress and later became a tradition: the president would chair the opening of the plenary session as well as participate in the closing ceremony.

Personal meetings between Nazarbayev and delegations and leaders of different religions and denominations also play an important role. These meetings are an opportunity to openly discuss problems; to weigh in, if necessary, on the problems of coreligionists in Kazakhstan and perhaps to ask the president himself to be a kind of mediator with those who for some reason can’t be reached for a direct dialogue. We are all very grateful for the fact that, despite his workload, the president finds time for this. These meetings have become a part of the work of the congress, an element that is no less significant for remaining behind the scenes.

But really, I call President Nazarbayev the hero of the congress because it was he who first suggested the concept of the congress. (I’ve already talked about this in one of my publications.) As the head of a multinational and multiconfessional country, President Nazarbayev was keenly aware of how necessary religious dialogue was for the progressive development of tranquillity, peace and harmony, both in his country and for his neighbours. With the departure of the communism-capitalism ideological clash in the country, unhealthy political forces tried to replace it with religious differences. Every situation has multiple solutions. You can wait for a fire to kindle and then put it out, or you can do something to prevent the fire in the first place. Kazakhstan chose the second option.

Sometimes you hear complaints that forums of this scale are expensive.

They are really expensive, but to be fair, the most expensive fire extinguisher is still cheaper than a fire. And the most important thing is not immediate pleasure, but urgent necessity. If you have doubts, switch your TV to a news programme. People are blowing up mosques, burning churches, killing their ministers and igniting conflicts that grip entire nations. I think with sober reflection, doubts about the necessity of this dialogue in Astana will disappear.

Sometimes during the congresses, proposals are made to hold a congress in another country. I do not doubt that this would be an important event and a good thing, but it would be a different congress. Over the years, the members’ and delegations’ confidence in Kazakhstan and the Kazakh people have emerged and strengthened. A special atmosphere has been created that allows participants not to come back each time to the beginning, but to move forward, if not always as quickly as we would sometimes like. Changing the venue of the congress, in my opinion, would push us back. There would be new organisers, new faces, the need to adapt again to all the new mechanisms and personalities. I’m not sure that all participants in the current congresses would even come to another country. In addition, it would be a waste of time – an important factor in the present circumstances.

I say in all sincerity that as Catholics say about the inter-religious meetings in Assisi, that they are “in the spirit of Assisi,” we can say with a clear conscience that these congresses are held “in the spirit of Astana.” Another place would have a different spirit, in addition to all the questions of how soon a congress could be organised, if ever. Kazakhstan has earned a measure of trust and it would be a sin not to use it for the common good. It is also important to realise that a congress held in Kazakhstan is an incentive for the development of inter-religious and interconfessional dialogue within the country.

Over the years, the congress has contributed positive developments. At the most recent fourth congress in 2012, we took a great step forward. The step implemented the idea inherent in the name of the congress, creating the Council of Religious Leaders.

I think that we are now faced with laborious and difficult work: to make sure that this council is not only an idea, but begins to work. The task of the secretariat and all participants is to encourage leaders to join this direct dialogue, for which there is undoubtedly great need.

Today, we see growing inter-religious tension, new military conflicts, including those with religious overtones, and a growing number of terrorist attacks. All of these multiply the number of refugees and people suffering from hunger. In this situation, religious organisations and religious leaders cannot, do not have the right to stand aside and say nothing. They should be peacemakers, and their voices must be heard. They must make every effort to stop this madness and tragedy, do everything to show their believers that shooting each other and calling for war is not a solution for religious contradictions and remind their followers that everyone should honour God, whose right alone it is to judge who is right and who is a correct proponent of any faith. Kazakhstan provides such an opportunity, organising and holding a dialogue between different religions.

On behalf of the World Lutheran Association and all the churches within it, I thank the people of Kazakhstan and President Nursultan Nazarbayev for the attention, work and care they have given to this issue.

The author is Bishop of the Evangelical Lutheran Church in Kazakhstan, and the Representative of the World Lutheran Association.