By Alina Usmanova in Culture on 11 September 2013 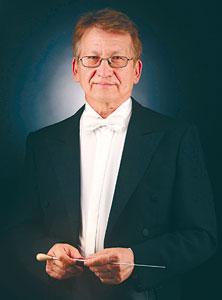 Renat Salavatov, Honored Artist of Russia, People’s Artist of Tatarstan and chevalier of the Kurmet Order was appointed art director and chief director of the State Academic Symphony Orchestra of the Zhambyl Kazakh State Philharmonic in Almaty.

The opening of the 79th concert season of the philharmonic will take place on Sept. 6. The soloist for the season’s first concert will be trumpet player Zhasulan Abdykalykov. The Symphony Orchestra will perform Russian, Western European and Kazakh compositions, in particular, “The Last Spring” by Grieg, “Valse Triste” by Sibelius and “The Sorcerer’s Apprentice” by Duke.

“What really makes this season stand out is its large number of directors, both Kazakh and foreign. There will be foreign soloists as well. Also, in a departure from tradition, we will combine choir with orchestra. In the past, symphonic and choral concerts were performed separately. The two have now been combined to create a completely different experience,” Salatov said.

Renat Salavatov was born in Shymkent. His art career began at the Kulyash Baiseitova Music School in Almaty where his talent for cello was first noticed. He was then invited to study at the Central Music School of the Moscow Conservatory. From 1985 to 1987, he was the head of the State Academic Symphony Orchestra and then served as the director of the Abay Kazakh State Academic Opera and Ballet for eight years. During his career, he worked at the Mariinsky Theatre, the Royal Opera in Sweden, The Metropolitan Opera in the US and the Grand Opera in Paris.

Currently, Salavatov is the chief director of the Tatar State Academic Theatre of Opera and Ballet. He frequently receives cooperation offers from foreign theatres, but chooses to remain at home.

“The State Symphony Orchestra is very dear to me. I played for its orchestra when I was a boy. I debuted in Almaty in 1965 as a soloist cello player during Akhmet Zhubanov’s tenure there. My life is closely connected with that orchestra. Every summer, I travel to Almaty, my home. One time, I wondered, why I have to visit my homeland as a guest and decided to find time for the orchestra,” Salavatov said.