ASTANA – On Sept. 22, the most adventurous and anticipated paint race will finally come to the capital. 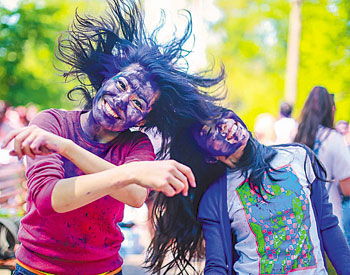 The residents of Almaty have already enjoyed the great colour run this summer.

The so-called colour run (or yarkokross) has its origins in India where every year thousands of Hindus participate in the festival Holi or a spring festival known as the festival of colours. During this event, participants throw coloured powder at each other as it is a time of enjoying spring’s abundant colours and saying farewell to winter. This colourful tradition has been transformed into runs combining the bright colours of Holi with the intensity of a 5 km race that started to spread all over the United States and then all over the world. This year, the fun colour run has finally come to Kazakhstan.

The event has already won successful recognition among Almaty and Karaganda residents who enjoyed the marathon this summer. The particularity of the race lays in special conditions that attendees should abide by: each participant should wear a white running outfit. While running, a team of volunteers throws a special coloured powder at contestants so that there will be no white spots remaining on anyone’s clothes when the runners finish the race. There are no age restrictions on participants as well as no time limit because it is more important to be bright and fully painted after the race is over.

The festival has several purposes: first and foremost, it should promote a healthy life style especially among the youth and serve as an alternative way of spending free time. Another essential thing is that the entrance fees are used to fund the planting of trees in the city where the race took place.

The first such colour run in Kazakhstan was organized in Almaty on June 23. About 300 active and enthusiastic citizens came to the Park of the First President in order to experience the new tradition. Each runner got a special bag with a white T-shirt, registration number and powder. It is important to mention that the race was organized in order to commemorate the International Day against Drug Abuse and Illicit Trafficking. The race lasted for three hours and inspired the participants who decided to create a flash mob with open air dances and a photo session. 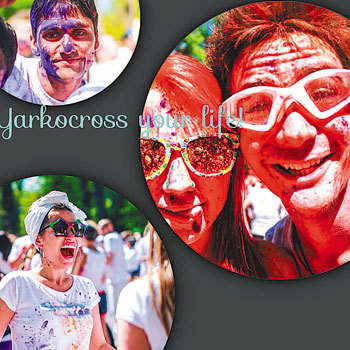 One of the volunteers who was tasked with throwing the powder, Aliya Bisenova, shared her impressions, “It is a fantastic feeling to see the happy faces of people running by and waiting to be showered with powder. I saw strangers giving hugs to each other as if they were old friends. One more thing to mention, a lot of senior citizens took part in the run – that was a surprise for me to realize how many cheerful and positive people we have in Almaty. I’ll definitely join the colour run next year, maybe as a runner.”

Another participant, Yana Dzhaparova said she was impressed by the show organized after the colour run. Local bands, dancers as well as an extreme cyclists’ team showed off their skills and entertained the public over the course of the next two hours. “I am very grateful to the organizers for giving us so many positive emotions!” Dzhaparova said.

It is not a surprise that after such a successful organization, the race is catching on in other cities of Kazakhstan. As one of the organizers Dauren Zholdaspayev said, “the colour race is going to be an annual event and should take place all over Kazakhstan as more and more people are asking for such races in their hometown.”

In Astana, the colour run will start at 10 o’clock at the parking place next to the Duman aquarium and entertainment center. In order to become one of the participants or volunteers you have to register on the official web-page of the event (http://yarkocross.kz) and buy a ticket.

The colour run is organized by the city hall of Astana, the United Nations Development Programme in Kazakhstan, PosadiDerevo.kz and Funk Creative Agency.