The Astana hockey club of Barys successfully started the sixth season of the regular championship of the Continental Hockey League (KHL). Having started with defeating “Severstal” from Cherepovets 10-1, in seven matches Barys stumbled only once, losing to the eminent SKA from St. Petersburg 2-5. 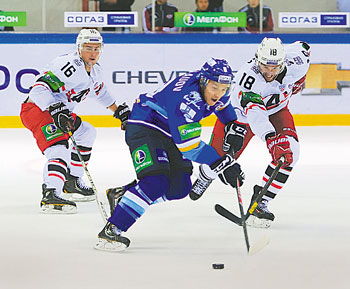 This was followed by four straight wins in the third round. Along the way, Barys set several records of performance and now claims a few more achievements.

Successful actions in the attack in the first seven games have allowed hockey players from Astana to strike opponents goal 40 times, a new KHL fresh record. At that, no KHL club, and in all previous Russian championships, managed to score 10 goals in the starting game.

Kazakhstan team does not play for records. Every time they go out on ice, the team players are set up to fight.

Nikolay Antropov, a Barys newcomer and the most famous citizen of Kazakhstan to have played in the National Hockey League, in the latest game against Avtomobilist from Yekaterinburg noted high competition in the composition of the Astana club.

As a result, Barys commands a strong lead in the Eastern Conference of the KHL, with a lot of games left to play, and is the third in the overall championship. The high performance brought out to the leaders in the individual standings. Barys forwards Nigel Dawes and Talgat Zhailauov are respectively the first and the fourth in the list of scorers, while defender Michael Lundin is the most valuable player in the KHL.

Barys will be playing the next four games away, visiting successively Ukraine, Croatia, Belarus and Russia.