By George D. Gleboff in International on 19 September 2013

ASTANA, Sept. 18 – Kazakhstan has matured as an independent country, has contributed to promoting global peace, security and development and can bring even more benefits to the international community if elected a member of the United Nations Security Council for the first time, the country’s top officials said at the launch of its bid in Astana on Sept. 17. 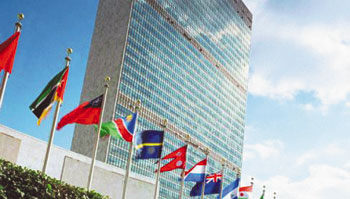 Deputy Prime Minister and Minister of Industry and New Technologies Asset Issekeshev and Minister of Foreign Affairs Erlan Idrissov addressed members of the foreign diplomatic corps, deputies of Kazakhstan’s Parliament and chief editors of major national media outlets at a reception expounding on the arguments in favour of the country’s bid to be elected a UN Security Council non-permanent member for 2017-18. The event at the foreign ministry was held symbolically on Sept. 17, the first day of the new 68th session of the UN General Assembly in New York.

“One of the major accomplishments of Kazakhstan’s foreign policy since independence is the reputation it gained as a responsible member of the international community making significant contributions to tackling modern challenges,” Issekeshev said in his remarks.

“We have a very solid track record in the area of peace and security,” he continued. “We are convinced that any disputes and conflicts can be resolved peacefully, that peace and security can be achieved by creating a sustainable relationship environment, which minimizes the possibility of confrontation. It is in this spirit that we are ready to work in the world’s main body responsible for peace and security.”

“The Security Council is the globally recognized main body responsible for peace and security. In this regard, it is important that the Council is formed in such a way so that it can more fully reflect the opinion of the international community. If elected, Kazakhstan will become a member of the Council for the first time. This will confirm the balance and equitable geographical distribution in the Asian group,” Idrissov said.

2017 will be a milestone for Kazakhstan because it will mark 25 years of the country’s membership in the United Nations.

“Kazakhstan recognizes the key central role of the United Nations in the maintenance of international peace and security, the promotion of sustainable development and the protection of human rights and fundamental freedoms,” Idrissov noted. “We believe that the multifaceted and interconnected challenges and threats facing the world today can be best addressed through a reformed and strong United Nations.”

According to Idrissov, the current crisis in Syria and the international community’s response to it so far is “a clear example that we have to unite efforts and do things together as that is the best way forward to achieve results.”

“We pay particular attention to strengthening co-operation with the UN in the field of security and non-proliferation of nuclear weapons and other weapons of mass destruction, economy, environment, social development, the progressive development of international law, respect for human rights, in the fight against terrorism, organized crime and drug trafficking,” Idrissov noted.

Since it joined the United Nations, Kazakhstan has participated in all of its major events and played host to major international forums under its auspices. These include the first global UN Conference of Landlocked and Transit Developing Countries in Almaty in 2003, the 63rd session of the Economic and Social Commission for Asia and the Pacific (ESCAP) in Almaty in 2007, the Conference of the World Health Organization (WHO) dedicated to the 30th anniversary of the Almaty Declaration on Primary Healthcare in Almaty in October 2008, the 18th session of the General Assembly of the UN World Tourism Organization (UNWTO) in Astana in October 2009 and a number of other activities.

Creation of CICA, Nuclear Disarmament, Participation in Peacekeeping Operations, Focus on Security in the Middle East and Afghanistan

Addressing the audience with a 20-minute speech accompanied by a slide presentation, Idrissov stressed that Kazakhstan has been working closely with the international community in various regional and international forums on all topical issues on the agenda, and, in addition, has initiated and achieved the establishment of a number of organizations.

In 1992, Kazakhstan launched the initiative of convening the Conference on Interaction and Confidence Building Measures in Asia (CICA), which over the past 20 years has been transformed into the largest and most effective platform on security issues in Asia. Earlier this month, during President Xi Jinping’s visit to Astana, officials announced that China will take over the two-year chairmanship in CICA for 2014-16 from Turkey.

“We are grateful to our Turkish friends for a very informed and very substantial chairmanship of CICA over the past four years, and we hope that the transfer of the chairmanship to China will give a new momentum and new quality to enable CICA to reach the goals it aspires to achieve,” Idrissov added.

Kazakhstan is known internationally for its commitment to nuclear disarmament and its active participation in global nuclear threat reduction and non-proliferation of weapons of mass destruction, the minister noted. In 1991, President Nursultan Nazarbayev made the country’s most important contribution to the global disarmament process when he closed down one of the largest nuclear test sites in the world at Semipalatinsk. Later, Kazakhstan voluntarily renounced and completely disarmed the world’s fourth largest nuclear and missile arsenal.

“We strive to improve the effectiveness of the UN in response to rapidly growing demand for peacekeeping operations,” Idrissov said. “We are also trying to improve the mechanisms for UN post-conflict rehabilitation operations, as well as to develop partnerships and upgrade the mechanisms of interaction between the UN and regional organizations, particularly with the Organization for Security and Cooperation in Europe (OSCE), CICA, Shanghai Cooperation Organization (SCO), Collective Security Treaty Organization (CSTO), in order to enhance international capacity in conflict prevention, peacekeeping and post-conflict reconstruction and rehabilitation.”

Kazakhstan’s chairmanships in the OSCE in 2010 and in the Organization of Islamic Cooperation (OIC) in 2011-12 were “further proof” of Kazakhstan’s recognition as a responsible member of the international community, the minister said. While Kazakhstan managed to convene the first OSCE summit in 11 years in Astana in 2010, which gave a new impetus to the organization’s development, it led the OIC during its reform and dramatic transformations that have affected the Islamic world, especially in North Africa and the Middle East.

“As those situations continue, through our statements, whether on Syria or on other events, we try to make it perfectly clear that Kazakhstan stands for very balanced, well-informed, collective UN-sponsored approaches to resolving those very challenging and difficult situations,” the foreign minister noted in another reference to current turbulence in the Middle East and the need to strengthen the central role of the UN in bringing about stability.

“Kazakhstan is also an active participant in international efforts to bring long-term stability to Afghanistan,” Idrissov said as he mentioned his meeting earlier in the day with a top Pakistani general focused on Afghanistan.

Commitment to the Rule of Law

Turning towards domestic policies, Idrissov said Kazakhstan is firmly committed to the rule of law.

“We work closely with the UN, the OSCE and the Council of Europe on conducting democratic reforms. Kazakhstan’s membership in the Human Rights Council from 2013 to 2015 reflects our commitment to promoting human rights, both at the national and international levels,” the minister explained.

The four priority pillars of the country’s bid are food, energy, water and nuclear security.

Kazakhstan is one of the most multi-ethnic and multi-cultural countries, where representatives of 130 ethnic groups live and follow numerous religions, the minister said.

“We actively participate in inter-faith and inter-religious dialogue. Over 20 years of independence, Kazakhstan has provided full freedom of religious belief. And we have played host to the Congress of Leaders of World and Traditional Religions, the fifth such congress will take place in 2015,” Idrissov commented.

Food, Energy, Water and Nuclear Security Are Four Pillars of the Bid

“Kazakhstan’s active involvement in a large number of regional and global processes provides it with the knowledge and experience to address many of the issues facing the United Nations Security Council,” Idrissov underscored. “I would like to emphasize our commitment to the comprehensive concept of peace and security. We believe that peace and security, human rights and sustainable development are interconnected issues that need to be achieved together as part of a single approach.”

“We believe that food, environment, energy and water security can be permanent areas of cooperation between the Security Council and other UN bodies, including the newly established political high-level forum on sustainable development,” the minister said.

“Kazakhstan knows from its own experience about the potential impact of scarce resources, such as water, and seeks to free future generations from suffering from this scourge. At the same time, Kazakhstan is blessed with hydrocarbons and other resources that it intends to use in a sustainable manner. In addition, we are working on establishing a national agency for the promotion of international development tentatively called KazAid to provide development assistance, and we hope it will be functional soon,” Idrissov continued.

“We are also developing Almaty as a regional multilateral cooperation center, including the provision of humanitarian assistance, in particular in Afghanistan – a country which is severely affected by overlapping problems in water, energy and food security,” the minister said.

“Drawing on its own national and regional experience, Kazakhstan intends to promote issues of water, energy and food security – now one of the most serious existential problems of our time – in the body with the primary responsibility for maintaining international peace and security,” Idrissov commented drawing attention to the four-part logo of Kazakhstan’s bid for the UN SC membership. “And, of course, continuing our leadership in the United Nations in the field of nuclear disarmament, we will seek to link issues in this area with the agenda and work of the Security Council.”

“Kazakhstan recognizes the vital importance of ensuring greater transparency in the Security Council’s decision-making, as well as achieving accountability of its work, shared responsibility and more active participation on the part of non-members in the work of the Security Council,” Idrissov said.

“As a non-permanent member of the UN Security Council, – and, who knows, maybe as a permanent member by 2050, – Kazakhstan will cooperate fully in contributing to maintaining international peace and security, as well as to the activities of the Security Council as a body that can effectively address the full range of challenges and threats facing our world,” Idrissov concluded drawing both smiles for his tongue-in-cheek remark about the hypothetical possibility of a permanent membership by 2050, and applause for the overall presentation.

Two-Thirds Majority of all UN Member Votes Needed for Election

Election for non-permanent seats for 2017-18 will be held in the fall of 2016, during the 71st session of the UN General Assembly. Kazakhstan is running for a seat on behalf of the so called Asian group. So far, only Thailand has also announced its candidacy for the same seat. Any other country can also put forward their candidacies almost up until the vote three years from now.

To win a seat, a country needs to receive no less than two thirds of the votes of all members of the United Nations. If no country’s candidacy receives such a majority in the first round, further rounds of voting are to be held, until one candidate finally receives the required number of votes.