ASTANA – Kazakhstan and UNESCO joined forces on Aug. 23 to host an international forum dedicated to the International Decade for the Rapprochement of Cultures and to promote international intercultural dialogue. 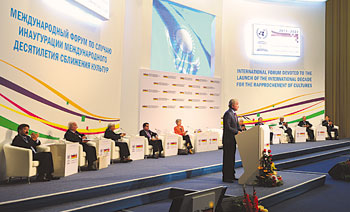 Astana Mayor Imangali Tasmagambetov opens the international forum on the International Decade for the Rapprochement of Cultures in Astana on Aug. 23.

The forum was held in Astana’s Palace of Independence and will provide the basis for Kazakhstan’s rapprochement plans for the next decade.

Imangali Tasmagambetov, mayor of Astana and chairman of the National Commission for UNESCO and the Islamic Educational, Scientific and Cultural Organisation (ISESCO), opened the forum with a speech noting that the event is one of Kazakhstan’s most important global initiatives.

“Let me welcome you to the land of Kazakhstan, in the capital of our independent country, and express confidence that most of the ideas we hear today will be implemented after the forum is over,” Tasmagambetov said.

Forum participants discussed a number of issues of common concern related to modern society. The exchange of views and experiences is intended to create a solid foundation for further cooperation in promoting and developing intercultural dialogue. At a press conference after the forum, Tasmagambetov said that a national plan for 2013-2022 would be developed based on decisions made during the forum.

“I want to remind you that the International Decade for the Rapprochement of Cultures is an initiative of the head of state, and in this regard the national plan of action is going to be approved by the Kazakhstan National Commission for UNESCO. The plan will cover various events for all regions of our country, but as Astana is the capital, the major part of the work has to be done here,” said Tasmagambetov.

A special UNESCO award ceremony also took place during the forum, during which Alakol State Nature Reserve was given the status of a UNESCO biosphere nature reserve. It is the second reserve in Kazakhstan to be included in UNESCO’s World Biosphere Reserve Network. Also during the forum, Director General of UNESCO Irina Bokova awarded the title of UNESCO Goodwill Ambassador for Sport to two-time world champion and 2012 Olympic boxing champion Serik Sapiyev.

“I am very happy to join the ranks of those awarded this special and honourable title. I will fully support the policy of UNESCO on education, sport and healthy lifestyles. I know that this is an important mission, and I’ll be proud to carry out this task,” Sapiyev said. After the ceremony, Kazakh pop artists including Ali Okapi, RinGo and Makpal Isabekova congratulated the champion and performed on the Palace of Independence stage.

The main purpose of the forum was to bring together representatives of the international political, academic and business communities and nongovernmental organisations to discuss issues related to the formation of a new global agenda for further developing intercultural dialogue and cultural diversity for the sake of peace and stability.

The event was attended by heads of international organisations and members of the High-level Group of UNESCO for Issues of Peace and Dialogue of Cultures, as well as experts on ethics, cross-cultural communication, education and cultural heritage from more than 30 countries.