By Almir Iskakov in Culture on 24 September 2013

ASTANA – Astana’s young entrepreneurs learned about Spanish art when they gathered Sept. 18 at the Black Duck restaurant for the latest Fryday W event. 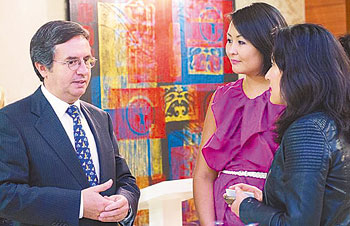 Spanish Ambassador Manuel Larotcha Parada (left) was a key and much sought after guest at the event.

“The event was very informative. The participation of the Spanish Ambassador Manuel Larotcha Parada and film director Nicolas Alcala attracted many people,” said Assel Rakhmetova, who is a regular at Fryday events.

Fryday events are usually held on Fridays, however, Frydays W are held for special occasions on Wednesdays. This time, the special occasion was the arrival of Spanish film director Nicolas Alcala to promote his feature film “Cosmonaut.”

Following the Spanish theme, a collection of photographs presented by the Spanish photographer Txema Magdalena was up for sale for an average of 7,000-8,000 tenge ($46-$52).

Event hostess Merey Mustafina started the evening with the introduction of Spanish Ambassador Manuel Larotcha Parada, who noted the importance of bilateral relations between Spain and Kazakhstan in many spheres. He also mentioned the upcoming visit of the Prime Minister of Spain to Kazakhstan, which is to take place on Sept. 30.

Fryday was founded in Kyiv, Ukraine, in April 2010 and during its first year, it grew from being a small group of mostly expats to becoming a gathering that attracted several hundred guests each time.

In September 2011, Fryday expanded to Almaty, Kazakhstan, and in early 2012 the expansion continued to Tbilisi, Georiga, and then to Kharkiv and Dnipropetrovsk in Ukraine. Although Fryday is seen as an internet community, it is essentially an offline event supported by online social media groups.

Fryday afterwork parties were launched in Astana on Friday, April 13, 2012 to provide a relaxed environment for business socializing in some of Astana’s top venues. The Fryday network is being developed in the Commonwealth of Independent States, the Baltic, the Middle Asia and Eastern Europe at the moment. It has a database of over 85,000 contacts across Eastern Europe and Central Asia.

“I decided to be involved in Fryday because I was on maternity leave with two babies. Fryday is a very convenient means as a part time job that can be profitable. But the best thing I enjoy is the socialising with interesting people,” Mustafina told The Astana Times.

Attendee Dilshat Daulbayev was also pleased with the choice of the Black Duck restaurant for the latest event. “This place I think is perfect to host such an event. It’s got all the conveniences for any event and is located right behind Khan Shatyr. I really like the interior design. It looks very rich, the staff is very smiley and friendly, the food is good. Basically, everything they need to host such events,” he said.