ASTANA – The final match of the Kazakhstan Cup ended in a shootout, with Yannick Rindeo of Arlan Hockey Club scoring the decisive goal to push his team ahead of Irtysh. The final score was 3-2. 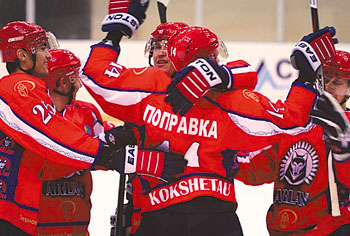 The players from Pavlodar struck first, with distinguished striker Andrey Nedorost reaching the back of the net in the sixth minute. After that shock in their home arena, Kokshetau’s Arlan increased the pressure on their opponents. With support from the crowded bleachers, they created a number of dangerous moments, but no points.

Arlan had more success in the second period, when through the efforts of Martin Krishka and Rindeo, they crept ahead of Irtysh, 2-1. Then, in a dramatic final 20 minutes, Irtysh came alive and with 11 minutes to go, tied things up.

The score remained tied at the end of regulation time, bringing on the shootout. Rindeo clinched the victory for Kokshetau, passing from the blue line and chipping the puck in.

After the match, Arlan’s new coach, Vladimir Kling, said, “Everything was very good … I watched all the matches in group B and saw the level of teams. Everyone wanted to win. The best teams met in the final and the score of 2-2 confirms it. As for the shootout, we had more skill and we scored the winning goal.”

Irtysh will take second place in the tournament. Arystan took third place, beating Almaty Hockey Club by a score of 5-2.