Against All Odds: Shakhtyor – Celtic 2:0

ASTANA ARENA, Aug. 20 – Champions League underdogs Shakhtyor of Karaganda, a city with a population of one million, made a solid step into the Champions League with a commanding 2-0 lead over Celtic of Glasgow in the first leg of playoffs in Astana. Nearly 30,000 Shakhtyor supporters watched the match in Astana Arena and many of them, as well as supporters around the country, celebrated what may be the country’s biggest football victory well into the night. 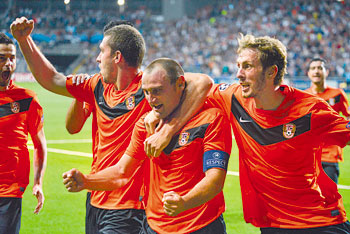 Whether it was luck or home field advantage, this match is the country’s biggest football victory in recent years.

Celtic went into the game full of confidence, but cautious, as little-known Shakhtyor could hide unseen threats. The Scottish coaches reviewed hours of video before the game, but had never met the players or their field. Still, odds were against Shakhtyor, two-time, back-to-back Kazakhstan champion (2011, 2012), versus the 44-time Scottish League champion and European Cup winner in 1967. Celtic looked a class above the Kazakhstan team both on paper and often during the game.

However, Russian and former Soviet teams are still considered at least inconvenient opponents for the Scottish and Premier Leagues. This time, things started to go wrong for Celtic from minute 11, when Andrei Finonchenko sent a left-foot ball past Celtic goalkeeper Fraser Forster.

After that, Celtic had managed to break the game in their favour, with a seemingly impenetrable midfield, good defence, excellent ball possession (65-35 percent for Celtic according to game statistics) and exact passes. They prodded Shakhtyor’s back line and a few times roughed up Kazakhstan’s keeper, Alexander Mokin, though he remained en guarde.

The second half started with pressure from the Scots where they left off at the end of the first half, though not a lot was going Celtic’s way. In the 76th minute, Sergey Khizhnichenko punished guests for leaving with a header from a perfect cross and caught Forster and the back liner off guard, giving Shakhtyor a commanding 2-0 lead going into the next game in Glasgow on Aug. 28. If most fans in Kazakhstan came to the match hoping to walk away with a tie, after the first goal they demanded another. After the second goal the game was finished for the Scots, who essentially quit hassling for the ball, as if mutually agreeing to seek revenge on their home field in a week’s time. Throughout the game, Celtic had many chances to equalise, but their shots were either stopped by Mokin or hit the bar or went wide.

The result of the game ignited thousands of comments in Kaznet social media, as many people lost joking bets and will now, as promised, have to either quit smoking or shave their heads. The nationwide celebrations continued well into the night across the whole country. Whether it was luck or home field advantage, it is history now and a solid step into the Champions League for Kazakhstan’s new national pride.