ASTANA – South Korea Ambassador to Kazakhstan Joohyeon Baik told The Astana Times during a recent face-to-face and follow-up email interview that he hopes his country’s experiences will help contribute to Kazakhstan’s continued growth as an independent nation. 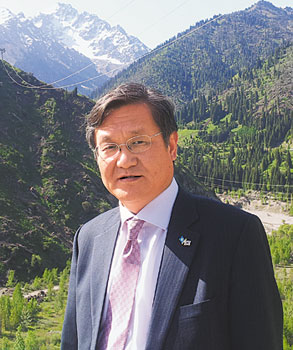 “I can say, straightforwardly, that Korea wants to be a humble contributor to the process of economic development of Kazakhstan,” he told The Astana Times. “Because our experience was pretty tough for us, and we needed friends and consultants who could kindly advise.” The ambassador said that though Kazakhstan has resources and wealth his country didn’t have at the beginning of South Korea’s development 40 years ago – “We had only motivation. We did not have anything,” – South Korea still has relevant information to share about training, education, motivation and high technology.

Kazakhstan and South Korea have had a long and active relationship. Kazakhstan is South Korea’s most important trade partner in Central Asia and South Korea is the source of a great deal of investment, as well as a development model for Kazakhstan. The two countries collaborate on projects in a range of fields including culture, energy, education, medicine, science and technology.

“We are ready to share our knowledge, which we have gained over the past 30 or 40 years, with Kazakhstan,” the ambassador said. Some of this knowledge exchange happens at ministerial levels with high-level meetings between government members and experts occurring several times a year. Over the past 20 years, through official development aid and the Korean International Cooperation Agency (KOICA), which implements government aid and grants, South Korea has provided a range of training programmes to exchange experience in economic development, specialist and civil service training and policy development support. “In the future also, the Korean government plans to develop and further deepen our cooperation in these areas,” the ambassador said.

He also emphasized the importance of a skilled workforce to the advancement of a growing country. “We felt it is quite necessary to bring up a skilled workforce: without that, nothing can happen in Kazakhstan,” the ambassador said.

Kazakhstan’s Bolashak scholarship programme facilitates this kind of exchange. Kazakh doctors in increasing numbers are being invited to train in organ transplantation in Korean hospitals through the programme. Korean doctors also consult with their Kazakh counterparts remotely, collaborating on after-care for patients and sharing expertise gained through Korea’s involvement in cutting-edge research and treatment institutes like MD Anderson at the University of Texas.

Healthcare is a sector that may soon see a major intensification in cooperation. “My sincerest hope at the moment is that Korea and Kazakhstan sign the Korea-Kazakhstan Joint Action Plan on Healthcare 2012-2015 before the end of this year. This action plan ensures medical personnel training, medical tourism, medical cooperation and joint seminars and planning of further such projects,” the ambassador told The Astana Times. He mentioned that reports have shown that Kazakhs and Koreans have a very similar genome structure, which is a major factor in medical treatment. “This is an important factor in the ever-greater interest the Kazakh people are taking in medical treatment in Korea,” he said.

South Korea has long been a major investor in Kazakhstan. “South Korean companies now consider Kazakhstan to be one of the most attractive markets for investment,” the ambassador said.

The innovative Balkhash plant and Atyrau complex are projects will also serve to encourage further investment, according to the ambassador.

However, there may be delicate times ahead for investment between the two countries. “The most important factors for foreign investment are these basic conditions: visa, work permit and not only yes or no, but how long it takes,” the ambassador said. Despite several years of negotiations, Korean visitors to Kazakhstan still need to apply for and wait for a visa, something that “hinders Korean direct investment a lot,” according to the ambassador.

Joohyeon Baik noted that the Korean government has just concluded an agreement with the Russian government to allow Korean tourists and businessmen 60-day visa-free visits starting next year. “That means Korean businessmen and Korean tourists can go to Russia without a visa for 60 days, and I think it will affect the investment atmosphere for Korean businessmen in the Russian Federation a lot.” Joohyeon Baik said the Korean and Kazakhstan governments were in close consultation on the issue, but that it still had not been resolved.

“[Business people] will never think about bilateral relations between Korea and Kazakhstan; they’ll never think about the strong relationship between the leaders. A strong relationship between countries helps businessmen, but it does not mean all things for business. Businessmen are thinking about how to enhance their level of profit and how to feed their employees,” the ambassador said.

“And Korean companies are not Korean companies. For example, Samsung: about 60 percent of their stock is owned by foreign investors. So they can’t do what they want. They have to explain what their policy is and where they’re making a profit and where they’re making expenditures. It’s a very transparent company. So the decision to invest somewhere… depends on the level of profitability.” Korean companies will not invest in Kazakhstan simply because the relationship is strong and historically important, he said. Ease of doing business and profit are the key. “Comparatively, Kazakhstan is stable: I recognise and I appreciate that. But Kazakhstan should be more aggressive in opening and enhancing the system. They can do it.”

However, the ambassador also pointed out that, despite the recent global financial crisis, Korean companies have stayed involved in Kazakhstan, as they have in other parts of the world that other nations have pulled out of. “In spite of various difficulties both at the domestic and international level, including the 2008 global economic crisis, Korean companies never left Kazakhstan’s market and have stayed by the side of our Kazakh partners to overcome difficult times and, therefore, share together the positive outcomes of our endeavours as they do indeed bear fruit,” he noted.

One upcoming major endeavour is EXPO 2017. South Korea’s Green New Deal, launched in 2008, introduced large-scale investment into the green economy, and Korean companies have been investing in renewable energy projects for years. Currently, Korean companies are seeking to participate in EXPO 2017 in projects relating to information and communication technology, renewable energy and transportation.

“In these areas, Korea has accumulated great know-how and technological ability in development and operation,” the ambassador said. “Likewise, Korean companies have excellent international competitiveness in meeting deadlines with quality as will be the case for the EXPO 2017 projects.”

EXPO 2017 won’t be the countries’ first collaboration in renewable energy, however. In 2012, Daesung Energy transformed Saribulak village, 200 kilometres northeast of Almaty, from a place of chronic water and energy sources to an energy-independent “green village.” Daesung Energy installed an independent solar photovoltaic power generation system with a capacity of 52 kW in the village, which now produces electric power and drinking water by itself using solar power.

“This project is an excellent example demonstrating how remote villages can benefit from cooperation among the Kazakh government, local partners and the Korean embassy in Kazakhstan,” the ambassador said.

Culture is another major area of cooperation. More than 100,000 ethnic Koreans, descendants of those exiled here by Stalin in the 1930s from the Far East, live in Kazakhstan and K-Pop and Korean movie festivals are organised every year in cities around the country. Astana also has the most recent and modern Korean Cultural Centre in the world, the ambassador said. “This cultural centre in Astana is the most modern and well-equipped of these centres in the world. We have 25 centres around the world and this is the most modern.”

The centre offers language, cooking and taekwondo and folk music classes. At the end of August, the Korean male choir I Maestri will visit Kazakhstan, performing in Almaty on the 27th and Astana on the 29th. Kazakh opera singer Nurzhamal Ussenbayeva will also participate in the concert. There is also a plan to conduct joint historical research into the bonds between the two countries.

Ambassador Joohyeon Baik said that, for now, he believes his country can act as a “pacemaker,” helping to show Kazakhstan “how to maintain the pace of the developing speed and the developing tempo of Kazakhstan.”

But as Kazakhstan keeps up its pace of development, the relationship must change. “Until two years ago, Korea was the donor and Kazakhstan was the recipient of official development assistance. But no more,” he said. Kazakhstan is now on its own journey of development. “But still, Korea will remain as a helper and contributor and hopefully sometime a competitor, too,” Joohyeon Baik said.

He added that in 10 or 15 years, he hopes the two countries will be engaged in fair competition. In the meantime, he said, “It is my sincere and humble hope that Korea will indeed continue to contribute to the policy of industrialisation of the government of Kazakhstan. Korea is keen to share with our friends in Kazakhstan the valuable lessons we have learned from both our successes and failures in the process of rapid economic development.”