ASTANA – Nord Prom NS, Yutariya Ltd. and Ren-milk were announced as the most recent regional winners of the “Best Products in Kazakhstan” contest at the central region contest exhibition in Karaganda on August 10. 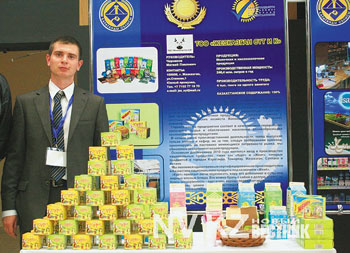 Industrial, food and home products manufacturers from Karaganda, Almaty and East Kazakhstan region competed for best-in-the-country product. The winners will meet again in the frames of the national competition in Astana by the end of the year.

The region included Karaganda, East Kazakhstan and Almaty. The winners, along with winners from other regions of the country, will go on to compete in the national competition in Astana in December.

General Director of Yutariya Saule Shauenova credited government policy for her company’s win. “The success of a business depends on the support of the state. We managed to become a good, modern enterprise thanks to the Business Road Map 2020 state programme,” she said.

Serik Nadyrov, Sales Manager of Tenusa, which won for its polymer-ceramic pedestal sinks, told The Astana Times their product won for its modern design and international-level quality. “This contest is the key to the development of our production and to the prosperity of our company,” Nadyrov said. “We aim to contribute to the accelerated innovative development of our country. This victory in the contest is a great pleasure and we hope that in the future our products will be in demand in the market in Kazakhstan!”

Director General Oleg Muskafidi of TarazKozhObuv, which won for their men’s and women’s leather shoes, said, “This win proved that our products are of high quality, on trend and most importantly, are in demand on the market.” He said that the win would help them promote their shoes and other leather products both within Kazakhstan and beyond. “We got the first place thanks to the price, quality and the design. The jury underlined that our footwear’s quality is that of imported goods but much cheaper.”

The “Best Products in Kazakhstan” competition began by presidential decree in 2006. The purpose of the competition is to stimulate domestic industry and foster competition between domestic and foreign goods, as well as to shrink the credibility gap between domestic manufacturers and the population and promote an emphasis on product quality. Many of the companies taking part in the competition are also involved in the Business Road Map 2020, another government effort to promote small and medium businesses and boost and diversify domestic industry.