Reality and Fantasy Combined in Astana at French Artist’s Exhibition

ASTANA – An exhibition by French artist Anne de Colbert-Christophorov, organised by the French Embassy in Kazakhstan and the EADS Company, was on display at Khas Sanat Art Gallery from Jul. 10 to Aug. 10. 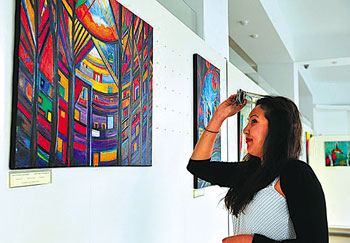 The event was tied to the cross-cultural season in France and Kazakhstan.

Anne de Colbert-Christophorov’s paintings are unconventional combinations of reality and fantasy. They mostly depict nature: landscapes with rectangular, triangular, conical and rhomboidal forms alternating with flat planes of lakes and undulations of fields. They contain the occasional butterfly, flower or bird, but no people.

Every object is painted in pure colour, without half-tones as a rule. The cold and warm colours coexist without conflict, instead creating polyphony, thick like the sounds of organ.

In her paintings, you see and feel morning clarity, the haze of the midday heat, the melancholy of the dusk.

Anne de Colbert-Christophorov does not hesitate to call a spade a spade: “Beautiful home on the red earth,” “Beautiful yellow sky,” “Small peak,” “Landscape with green houses” and “Pink City” are some of the titles of her work. Astana even makes an appearance, and rather than following the well-trodden path of documenting the monuments of the new capital, the artist chose to paint “Little houses of Astana.”

Descendant of the famous Colbert family, the most famous representative of which is Jean-Baptiste Colbert, French politician and finance minister under Louis 14th from 1665 to 1683, Anne de Colbert-Christophorov was educated at home, as her parents did not want their daughter to mix with common people. However, against their wishes she married Dr. Bojan Christophorov, and has mixed with common people while living and travelling in Germany, Finland, Brazil, Togo, Gabon, Tunisia and most often in Bulgaria, the home of her husband. The artist, who has four children, considers herself happy. She paints pictures and writes poetry, helps people and has won many prestigious international awards. The 50 works on display are mostly paintings and some watercolours and pastels.