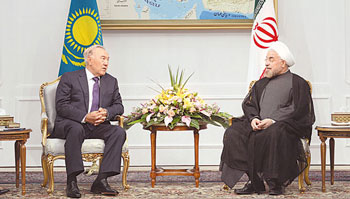 President Nursultan Nazarbayev congratulated the newly inaugurated Iranian President Hassan Rouhani and discussed prospects for bilateral cooperation on a wide range of issues during their one-on-one talks in Tehran on Aug. 4.

More than 50 foreign dignitaries, including presidents, prime ministers and speakers of parliaments, as well as representatives of international organizations attended the ceremony. Among them were the presidents of Tajikistan, Turkmenistan, Armenia, Afghanistan, Pakistan, Lebanon, Guinea-Bissau and Togo, as well as the parliament speakers of Russia, Algeria, Azerbaijan, Oman and Kongo. It was the first time in Iran’s new history that heads of states and leaders from abroad were invited to take part in an inauguration ceremony. More than 200 foreign journalists also covered the event.

On a dry and hot day typical of summers in the Iranian capital where temperatures regularly exceed 40 C, President Nazarbayev arrived at the Mehrabad International Airport in Tehran and was met by Iranian Vice President Eshaq Jahangiri.

The inauguration ceremony of the new Iranian President started at 4 p.m. local time on August 4 at the Majlis (the parliament) where Hassan Rouhani was sworn in before the deputies of the country’s highest legislative body. Rouhani, who is Iran’s seventh president since the 1979 Islamic revolution, formally began his four-year term prior to the Majlis ceremony on August 3 when Iran’s Supreme Leader Ayatollah Seyyed Ali Khamenei endorsed his victory in June’s presidential election. Rouhani won 50.7 percent of the votes in that election.

During the swearing-in ceremony, Rouhani delivered a speech in which he said “people have voted for moderation” and that his “government of hope and prudence” would work to fight poverty, corruption and discrimination. “People want change,” he said.

Following the inauguration ceremony, President Nazarbayev joined a photo session with other high-ranking officials and left a note in the Book of Distinguished Guests.

President Nazarbayev congratulated Rouhani on his election victory and wished him success in the conduct of his high office.

The two presidents reviewed prospects for bilateral cooperation on a wide range of issues and touched on international topics.

Nazarbayev and Rouhani stressed the need for greater development of the transit-transport potential between the two countries. In particular, the sides focused on the potential of the railway line along the route of Zhanaozen – Kyzylgaya – Bereket – Etrek – Gorgan, which has the potential to significantly boost regional cooperation in trade and economy, as well as increase the efficiency of transport and communication infrastructure in the region.

The parties also discussed efforts to resolve issues related to the Iranian nuclear programme. Kazakhstan has offered to help seek a resolution, including through the provision of a platform for a new round of negotiations among what has become known as the “5 +1 Group,” which includes the United Kingdom, France, Germany, China, Russia, the United States, on one side and Iran on the other. EU High Representative for Foreign Policy and Security Affairs Catherine Ashton co-chairs the talks.

Kazakhstan has already played an important role in helping the negotiating process. Kazakhstan’s previous capital and its largest city Almaty hosted international talks earlier in February and in April this year on the question of the future of Iran’s nuclear programme.

The proliferation of the weapons of mass destruction remains one of the major concerns of the international community and Kazakhstan in particular. And Kazakhstan, whose international influence has risen during the past decade, is a neutral post for those talks not only because it has positive relations with all of the 5+1 Group countries and Iran, but also because Kazakhstan’s own efforts toward nuclear disarmament are highly regarded by the international community. In April 2010, UN Secretary General Ban Ki-moon, in his speech at the former Semipalatinsk nuclear test site, stressed Kazakhstan’s leading role in non-proliferation and said that the country today “stands as a symbol of disarmament and hope for the future.”

Kazakhstan voluntarily shut down the Soviet nuclear test site on their territory in 1991, facilitated the withdrawal of more than 1,500 nuclear weapons deployed on its territory following the collapse of the USSR, negotiated with its neighbours to establish a Central Asian Nuclear Weapon Free Zone and initiated efforts resulting in the United Nations adopting a resolution establishing August 29 as the International Day Against Nuclear Tests. President Nazarbayev also launched in 2012 The ATOM Project, a new initiative to build global support for nuclear abolition.

As the world’s largest producer of uranium ore, Kazakhstan is also ideally positioned to host the first international nuclear fuel bank. The bank, which would be run under the auspices of the International Atomic Energy Agency and provide uranium fuel to enable states to power civilian nuclear reactors without having to risk not being able to procure uranium on the open market. All countries which meet IAEA conditions would be able to access the bank.

Recognizing the right of all responsible members of the international community to develop peaceful atomic energy under the safeguards promoted by the International Atomic Energy Agency, Kazakhstan has used its close diplomatic relations with its neighbour across the Caspian Sea to urge Tehran to learn from its example.

President Rouhani focused on change while delivering his inauguration speech and numerous Iranians on the streets of Tehran, a city of more than 12 million, told The Astana Times that change is what they expect from their new president. Taking into account that Rouhani represents the reformation wing of Iranian politics, his election would seem to signal that the Iranian people want the country to go in a new direction, a direction of modernization and more openness to the world.