As part of the Agribusiness 2020 programme, the Ministry of Agriculture has developed 15 master plans for each agricultural sector and is and preparing a map of regional specialisation. 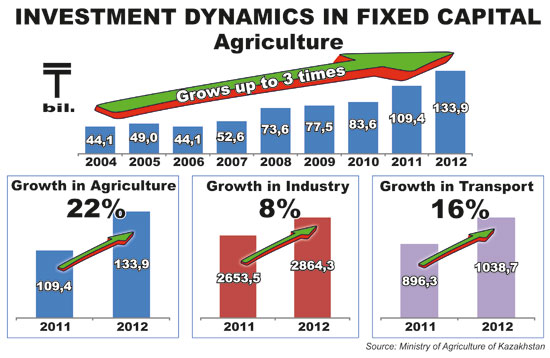 This was announced by Minister of Agriculture Assylzhan Mamytbekov at a cabinet meeting chaired by Prime Minister Serik Akhmetov on August 13. The agenda of the meeting included discussions about implementing the agricultural development programme from 2013-2020 and the activities of socio-entrepreneurial corporations (SECs) in the field of agriculture.

Mamytbekov started his speech with a look at the programme’s goals and history. According to him, overall agricultural output is growing. For the past 12 years, the volume of gross output has increased by almost four times and totalled 1.9 trillion tenge (about $12.5 billion) in 2012. Crop production has increased three times over the same period; livestock by almost five times. The growth in the number of livestock farmers and farms had a positive impact on the development of the agricultural sector. In 2012, indicators increased by 20.1 percent, and for January to June of 2013 by 22.8 percent.

The results of low investment can be seen in the low technological level of the industry’s equipment, low-intensity agriculture, low genetic potential and low productivity of farm animals.

The current situation in the industry dictated the need for the adoption this February of the Agribusiness 2020 programme. It provides new tools of government support in the form of capital grants, insurance and guaranteed loans, interest rate subsidies on loans and leases and bank funding, as well as measures to improve the mechanisms of compulsory crop insurance and livestock insurance.

Only a few months after the launch of the programme, the Ministry of Agriculture was able to unleash the “flywheel” of its implementation: a wide outreach and corrected strategic policy documents for the development of industries related to agriculture. In addition, the agricultural department developed 15 master plans for each agriculture sector. The mechanism of their implementation gives a clear breakdown of figures by year and by region.

This work can be measured by the example of the master plan for the development of dairy farming in Kazakhstan for 2014-2020. Its goal is to increase milk production in the country by 1.7 million tonnes by 2020, which will greatly reduce the share of imported milk and increase the rate of per capita consumption, given the constant growth of the population.

The master plan includes the construction of 20 industrial and 2,000 mini dairy farms and an increase in the number of livestock. The total amount of state support for the Agribusiness programme will amount to 32.5 million tenge (about $2.1 million). It is expected that the implementation of the master plan will reduce the payback period to 4-5 years. The real situations of farmers, in particular the lack of collateral and liquid funds, will be taken into account.

The Ministry of Agriculture with the participation of academic institutions developed maps of regional specialisation in the production of specific types of agricultural products based on climatic conditions and internal and external markets.

Regional specialisation maps enable differentiated and more effective public policies in agriculture by setting reasonable limits on the regional budget amounts of state support for agricultural production. The development of these limits is scheduled for completion in December of this year. “In addition,” the minister said, “measures are being taken to establish the necessary legal framework, and changes are being made to a number of regulations on subsidies.”

This will lead to an increase in local content, Darinov said. “Assembly production should open in South Kazakhstan, East Kazakhstan, Almaty and Zhambyl regions first, where more than 100,000 peasant households with small plots of land are concentrated.”

At the same time, the development of the sector requires measures beyond the scope of the programme and the master plan. For example, there are issues of technical and fiscal management, the system of sales of domestic products and administrative barriers. To coordinate the main activities of the central and local executive bodies on the development priorities, the Ministry of Agriculture developed a comprehensive plan for processing agricultural products, which is currently being coordinated with state bodies.

Regarding the financing of the programme, the Minister of Agriculture said that 136.8 billion tenge (about $896.5 million) had been allocated for implementation in 2013 from the planned 153.9 billion tenge (about $1 billion). Given that this year is the first step of the programme and much of the work is on preparing the regulatory framework, these funds will be enough.

Head of KazAgro Dulat Aitzhanov said that the development strategy of the holding is in line with the Agribusiness 2020 programme. This May, KazAgro attracted a loan through capital markets for $1 billion over a 10-year period. These resources will be used to fund the operations of banks and financial rehabilitation of agricultural producers.

“We have begun the Agribusiness 2020 programme and started to fund agricultural work and the leasing of agricultural machinery, and we already provide subsidised interest rates to refinance leases,” Aitzhanov said.

During the discussion, the prime minister said that the adoption of the programme promises to bring good results. He instructed the Ministry of Agriculture and concerned government agencies to organise operational coordination of legal acts necessary for the implementation of the new mechanisms of the programme; to approve the master plans for the development of agriculture sectors, particularly in livestock and animal health and to approve a comprehensive plan with appropriate funding. First Deputy Prime Minister and Minister of Regional Development Bakytzhan Sagintayev was tasked with coordinating the activities of all bodies concerned.

First Deputy Minister of Regional Development Kairbek Uskenbayev presented the vision of the Ministry of Regional Development for the activities of socio-entrepreneurial corporations (SECs) in support of agribusiness at the meeting. Currently, the agro-industrial complex of the country as a whole, with the support of Ministry of Agriculture, creates stabilisation funds that form the stocks of foodstuffs and vegetable production to stabilise prices in the food market and gives guarantees to agricultural producers in the financing of sowing and harvesting. However, corporations in most cases suffer from losses in these areas.

But even with the direct participation of the complex in business projects aimed at establishing agricultural production enterprises; building warehouses, greenhouses, service and procurement centres and providing the lease of agricultural machinery, there are many problems. These circumstances led to the adoption this May of the new concept of the Social Entrepreneurship Corporation (SEC). According to Uskenbayev, the exit of corporations from programmes where they experience losses is expected.

“We believe that the SEC should not engage in the construction of warehouses and greenhouses, the establishment of service and procurement centres, as well as the leasing of agricultural machinery,” he said. “The role of corporations should lie in the provision of comprehensive support for agricultural projects.”

He said that the SEC will determine the list of projects of the agro-industrial complex that have major socio-economic importance for the region and are attractive to investors, and will search for and attract investors in agribusiness projects and assist project proponents and investors in the development of business plans and documentation required for the project.

Summing up the discussion, the prime minister stressed the importance of maximising the opportunities of the SEC for agricultural development, particularly in the processing of agricultural products and the creation of service-procurement centres.

“Those are good tools of the development institution in the regions,” Akhmetov stated.

The prime minister instructed governors to make proposals to the government to ensure the break-even level of corporations. He also instructed the Ministry of Regional Development and the Ministry of Agriculture in cooperation with akims to specify their roles and responsibilities, particularly in the area of agricultural sector support.

Recalling that the first regional forum in Ust-Kamenogorsk recently noted the role of inter-regional cooperation of the SEC, Serik Akhmetov stressed that this work should continue with new projects in the agricultural sector. The prime minister also ordered the SECs to consider issues of participation in attracting investors to establish processing facilities.