ASTANA – In early June at Eurasian National University (ENU) at an expanded meeting of an interdepartmental working group, State Secretary Marat Tazhin announced a presidential directive to establish a special programme for historical research, “The nation in the flow of history.” 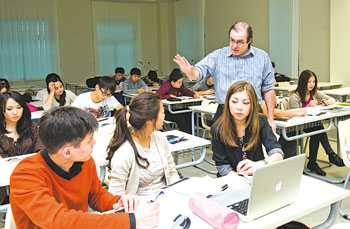 After the first 20 years of the country’s independence, historians partner together to present a comprehensive and unbiased history of Kazakhstan.

Its goal is be to create conditions for qualitative breakthroughs in the field of national historical science by utilizing the latest methodologies and recent additions to the national history of the Kazakhs while incorporating a new nation’s worldview and an understanding of the two decades of Kazakhstan’s independent history.

ENU Rector, Chairman of the National Congress of Kazakhstan Historians and academician of Kazakhstan’s Academy of Sciences Yerlan Sydykov chaired the briefing and provided the most information.

Non-govermental organization the National Congress of Kazakhstan Historians, working at ENU, has been tasked with defining priorities for the strategic development of historical and human sciences, historical education in general and the formation of a “new Kazakhstan patriotism.”

The National Congress of Historians hopes to publish a 20-volume series of “Otan Tarikhy” (Kazakh for History of the Motherland) and in April 2012, the international conference, “History of Kazakhstan: Results of Scientific Research” was held for the first time in Kazakhstan.

In October 2012, an International Eurasian scientific forum dedicated to the 100th anniversary of Lev Gumilyov took place. The university has also published more than twenty books in the series “The World of Gumilyov” and “The Issues of Eurasia.”

Archaeological excavations in Mongolia led by archaeologist Karzhaubay Sartkozhauly of the mausoleum of an ancient seventh century emperor have also made significant contributions to Kazakhstan’s historical science knowledge base.

As part of the programme, all higher education institutions in Kazakhstan will have departments of history and a new specialized history department will soon open at Eurasian National University to train professionals in the field.

Another ambitious project is the publication of a magazine that will be distributed in 25 countries, which the National Congress of Kazakhstan Historians hopes to begin publishing in the near future.

Another serious publication planned for the coming year is a book about Astana’s history. It will be released in Russian and by 2017—the year of the international specialized exhibition EXPO 2017—it will be translated into more than 10 languages. Officials and scholars hope it will be interesting to both foreign tourists and people in Kazakhstan.