ASTANA – Referencing yurts and eagles, suns and seas, 46 architecture and design firms displayed their proposed concepts for Astana’s EXPO 2017 pavilions in the Korme Exhibition Centre on August 14. The final design will be selected by a jury by September 1. 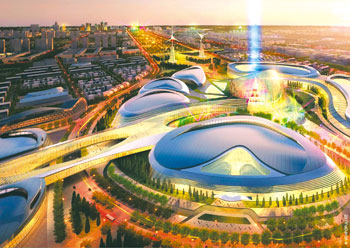 The 46 companies now vying to be the designers of Astana’s future energy expo village come from Australia, Austria, Canada, China, France, Germany, Italy, Japan, Kazakhstan, Norway, Portugal, South Korea, Spain, The Netherlands, Russia, Tunisia, Turkey, the United Kingdom, Ukraine and the United States. Included in that group are some foreign architects who already have designs in Astana, such as Manfredi Nicolleti of Italy, designer of the Kazakhstan Concert Hall; Studio-44 of Russia, designers of the Palace of School Children, and the Sembol Company of Turkey, which is behind the well-known Khan Shatyr.

The jury making the final selection will be advised by a technical council of about 14 individuals headed by economic and social theorist Jeremy Rifkin, president of the TIR Consulting Group and author of “The Third Industrial Revolution.” The technical council also includes international experts in sustainable design and development and renewable energy technology.

Aidar Marat, Senior Architect at the EXPO 2017 Astana National Company and a member of the technical council told The Astana Times, “The theme of our expo is future energy, so we have to analyse projects from a technical point of view. (That) means sustainability, sustainable development and the principles of the third industrial revolution… energy positive, zero emissions… we consider everything.” They also must make sure that the Bureau of International Expositions’ (BIE) strict exposition requirements for size, visitor flow and other aspects are adhered to. “And post-expo use is very, very important.”

The expo area must also mesh into existing Astana and prove itself to be a long-term liveable, usable urban area. “Urban planning is very important as [the expo site] is a… mini-sustainable city, basically. So we have to look at the urban planning.” The technical council will submit a shortlist of their recommendations to the jury, which will make the final selection. Marat said that it is possible the jury will request modifications to the selected design or suggest a symbiosis of elements from more than one design.

Director Alejandro Stochetti of the American company Adrian Smith + Gordon Gill Architecture, a likely frontrunner, was on hand to explain elements of his company’s design, which he described as “a new yurt, a future yurt.” “We want to create for Astana as a community that has all the strength to be sustainable. The idea is that Astana is a city that can only be here. Every design we approach is very specific to the site, so we take into account the cultural context, we take into account the climate, the connections to the rest of the city; we want to build a community that is enduring. So it’s a symbol for Astana but it’s also a community,” he said. He said all elements of the buildings had been designed to reduce energy consumption and maximise the collection of solar and wind energy.

After the expo, much of the design will be residential buildings. “A project like this one, like all the ones we do, is done for life… Nothing here is demolished, nothing here is wasted. All the pieces in the design are to last… It’s a community, we want to focus (on the fact that) this is a community centre. A community within the expo, which is the key here. So you have an expo, which is good during the expo time, which is short, and then after that it’s a community that’s going to thrive… We made sure every house in this development has access to sun and is landscaped properly, so it’s going to be a very, very nice place to live,” Stochetti said. 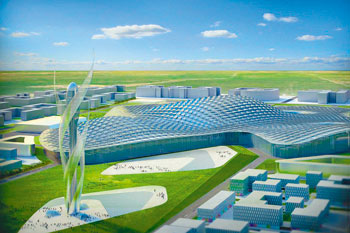 One of the competing designs, Zhelgul Tower from Manfredi Nicoletti symbolizes the birth of the new EXPO 2017 city and stands for the use of the wind power.

Magnus Weightman and Polina Strukova, urban planner and architect, respectively, from Mecanoo, also discussed their concept with the Astana Times. “We were inspired by a medieval settlement that was five kilometres away from the location, which was an earth wall combined with temporary structures. It’s a permanent piece of land art, you could say, which encapsulates a grand space where the temporary structures would come,” Weightman said. A solid wall would encase permanent spaces like theatres and concert halls, and an open area would be usable after the expo as a park and an area for festivals. After the expo, the entire area would become a city quarter involved in energy, science and technology.

Weightman said he was also fascinated by the steppe landscape and the role of water in Astana. “We’ve noticed in Astana itself you have this sort of urban grid which is then toyed with by the form of the river and the lakes… you see the natural forms of these lakes. So in the urban plan, you have a man-made grid combined with natural form of nature, in a way.”

Energy for Mecanoo’s design would be collected through wind turbines, special walkable solar panels in the areas paths and algae in the water elements. “We’ve been working together with experts from the technical university in Delft… and they did the calculations and think that it’s at least energy neutral if not energy productive over a year cycle, which is for sure for us an important goal,” he said. The design is a marriage of Kazakh inspiration and some Dutch elements like bicycle paths, pedestrian-friendly streets and residential clusters based around central courtyards.

Saken Narynov, Kazakh architect and inventor, presented a design of a giant Möbius Strip that also reflects ancient Saka culture. “Sakas, who lived on the territory of Kazakhstan… depicted breech animals. They wanted to say that humans and animals are creatures of this world and they will all end up in the afterlife. And the breech child is the point between life and death,” he said. The pavilions would be inside the huge strip, which after the expo would be turned into an observation wheel with views of the whole city and entertainment facilities inside. “All of this will be powered by sun-collectors and solar panels and from the ground by geothermal heaters,” Narynov said.

Marat commented that most of the designs were quite good, with some stronger on aesthetics, some stronger on sustainability or meeting BIE requirements. “As the president (President of Kazakhstan Nursultan Nazarbayev) mentioned, there could be one symbiosis of several projects.”

Expo concepts were displayed from August 14-16.