ASTANA – Temirlan Ormankulov was born with cerebral palsy. But that didn’t stop him from founding the hip hop group One Life, which was nominated for Best Hip Hop Group in Astana in 2013 by Radio Max. He now has big plans for his band, show business across Kazakhstan and, on a personal level, motivating physically challenged youth around the country. 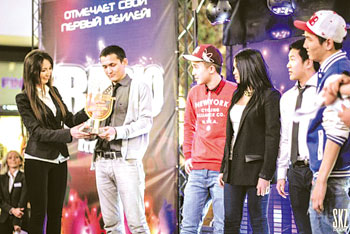 “Everything started in 2007. I was swept away by music, but I didn’t have friends and no one wanted to do anything with music,” Ormankulov, who is almost 19, told the Astana Times. “Then at some point, the fact that no one believed in me really offended me.” He said he became driven to succeed out of spite, to prove to everyone that he could make music, no matter what the obstacles. With just a simple tape recorder, he and a friend, Yeldos Bakhtiyarov, founded One Life.

The two-man group has now grown to twelve members who sing, rap, make clips and mix beats. Ormankulov said the group is always looking for other talented individuals. He’s not the official producer or head of the band, but he was voted leader by the group. “I wake up early and go to bed late thinking about our next steps,” Ormankulov said. Currently, they’re focused on making Astana a hip-hop city.

“We seek to develop the culture of music like R&B, rap and hip hop in Astana,” said Ormankulov, who said he also loves Ray Charles and old records. “Many think that these are pipe dreams, but we manage to get at least 100-200 people at every concert we perform. And we perform almost every week.” One Life can be seen at Bogema, Graff, Oscar Club, Sky Beach and other locations around the capital. Their website is still under construction, but some songs and videos have been posted on their VK.com page, Vk.com/primuskz. Each of their songs, “is my emotions, my feelings, a part of me,” Ormankulov said.

The group plays with different styles, and Ormankulov says One Life is looking for its own style. “We want to break the stereotype that Kazakhstan only has folk music, that all the talented guys leave for Russia and the U.S. We can still produce good music,” he said.

There are a lot of stereotypes Ormankulov wants to break. “I never complain about my life: I have a girlfriend, I cook—no matter how strange it might sound—I have great parents, I earn my own living and help my parents and try to help people,” he said. His music is also largely motivational. “We have a few commercial music videos, but most of our songs are motivating other kids… giving them hope and making them dream huge.”

Ormankulov sometimes gives conferences and speeches at hospitals, telling kids to believe in themselves. Ormankulov, himself, once dreamed from his hospital bed of making music. He said it’s been hard work for him to achieve what he has, and to this day, because of his cerebral palsy, people are surprised at his success. He says it’s his goal to motivate people to believe in a world beyond their current situation.

“We called ourselves One Life because everything is done in one life, and we have to hurry to try to do it all in one life,” Ormankulov said at his band’s studio at the Channel 7 building in Astana. The studio space and all their equipment, he said, were earned without the help of parents and sponsors, but through band members’ own work. Next month they plan to open a new studio, which Ormankulov said will be “the best in Astana.” They’re also starting a tour in September. “I think in four years One Life

will be one of the most recognised bands in Kazakhstan, guaranteed,” Ormankulov said. “I have a vision of a packed stadium listening to our music, hearing it and understanding it.”

But One Life isn’t looking to rise on its own—they want to grow along with the music scene all over the country. “There are a lot of kids like us from different towns, and we want to unite to promote showbiz in Kazakhstan, to elevate it to a different level.”

Ormankulov is now also daring to dream beyond Kazakhstan. He speaks Kazakh and Russian and is now learning English to expand the horizons of his music even farther. “I went through hardships earlier in life and now I have opened a new chapter in my life. Now my dream is to perform in Miami Beach or in Las Vegas,” the aspiring star said.