By Gulnaz Kalikhanova in Nation on 21 August 2013

ASTANA, August 12 – Continuous contribution to global nuclear disarmament, a new model of inter-ethnic and inter-religious dialogue and a successful development path have become key components of Kazakhstan’s international image, according to Kazakhstan Deputy Foreign Minister Kairat Sarybay who highlighted that message during his August 12 one-hour briefing at the Central Communications Service. 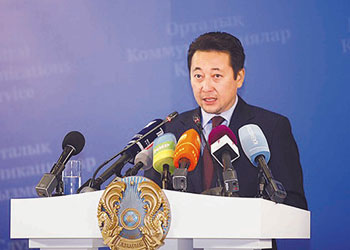 Deputy Foreign Minister Kairat Sarybay spoke both of the past achievements and plans for the future.

The diplomat summarized the work of the Ministry of Foreign Affairs in the first half of 2013 and the results of implementing Kazakhstan 2050 Strategy, which was announced by President Nursultan Nazarbayev in December 2012.

“We have a clear vision of the aims and objectives of Strategy 2050 and the methods and approaches to achieve them,” Sarybay said.

Kazakhstan 2050 dictates that Kazakhstan’s foreign policy priority will continue to be the implementation of a balanced foreign policy and the development of partnerships with Russia, China, as well as the United States, the European Union and the countries of Asia and Africa. The work of the foreign ministry in the past six months has been in line with these priorities.

According to Sarybay, relations between Kazakhstan and Russia are characterized by increasing cooperation in various fields and regular meetings at the highest level. The presidents of the two countries have exchanged working visits this year and the two countries are developing a new Treaty of good-neighbourliness and alliance cooperation for the 21st century.

Kazakhstan and China are also enhancing their strategic cooperation by maintaining a high-level political dialogue and developing bilateral relations in a range of areas including energy, investment, trade and joint use of transborder water resources. During President Nazarbayev’s visit to China in April, a number of important bilateral documents were signed, which were meant to intensify trade, business and investment cooperation. The countries also plan to sign an agreement establishing the Kazakhstan-Chinese Business Council during Chinese President Xi Jinping’s visit to Kazakhstan in early September 2013.

With regard to Kazakhstan’s relations with Central Asian countries, the first half of 2013 saw a visit by President Nazarbayev to Uzbekistan, as well as visits to Kazakhstan by Kyrgyzstan President Almazbek Atambayev and Turkmenistan President Gurbanguly Berdimukhamedov.

Joint activities in non-proliferation of weapons of mass destruction and cooperation in energy, trade, investment, science and technology remains the priority in relations with the United States, Sarybay said. Kazakhstan Foreign Minister Erlan Idrissov visited Washington, DC, in July and participated in the second meeting between the two countries of the Strategic Partnership Commission launched in 2012. The visit also resulted in an agreement between the two sides to issue five-year multiple-entry visas to the citizens of Kazakhstan and the United States.

With regard to another of Kazakhstan’s main trade and investment partners, the European Union, Sarybay said that developments in the past six months have solidified further positive relations. In that time, Kazakhstan was visited by European Commission President Jose Manuel Barroso, British Prime Minister David Cameron, Finland President Sauli Niinisto, Latvian President Andris Berzins Romanian Prime Minister Victor Ponta and other leaders. Kazakhstan and the EU are also developing a comprehensive new agreement on enhanced partnership and cooperation.

Sarybay also addressed relations in other regions, including the importance of President Nazarbayev’s recent visits to Iran and Israel. He also noted Deputy Prime Minister and Minister of Industry and New Technologies Asset Issekeshev’s visit to Japan and the official visit of Foreign Minister Idrissov to India.

Given the growing importance of the African region, including within international organizations, Kazakhstan plans to join the African Union as an observer state, Sarybay said during his briefing. Kazakhstan views Africa as future market for agricultural and other goods and place for investment in construction, oil and gas, and other fields, he said. Sarybay added that this year’s planned visit of President Nazarbayev to the South African Republic should become an important step in the history of Kazakhstan’s relations with that region.

In addition, there are good prospects for establishing comprehensive relations with key Latin American countries, Sarybay said. The foreign minister plans to visit a number of states in the region to discuss trade and economic cooperation, as well as the facilitation of a visa regime for Kazakhstan citizens, Sarybay said.

The foreign ministry also continues to work on Eurasian integration, mainly through enhancing the Customs Union and the Single Economic Space.

“Speaking of the Eurasian integration, the head of state sets the task of enhancing the Customs Union and the Single Economic Space. We stand for equal representation of parties in all the bodies of integration and for a consensus at all levels of integration interaction without any detriment to political sovereignty,” Sarybay stressed.

For this goal, the MFA has created a special Department of Eurasian Integration. At present, Kazakhstan and its partners in the Customs Union and the Single Economic Space are developing an Agreement on the Eurasian Economic Union, which should be ready by May 1, 2014 and enter into force on Jan. 1, 2015.

“We consider Kazakhstan’s participation in addressing global and regional issues and its active development of multilateral diplomacy as a strategic resource of foreign policy one of the key factors in ensuring the sovereignty, security and territorial integrity of our country,” Sarybay said. Therefore, the ministry pays close attention to developing cooperation within international structures, such as the UN, the Organization for Security and Cooperation in Europe (OSCE) and the Shanghai Cooperation Organisation (SCO).

The MFA is also promoting Kazakhstan’s international initiatives, such as hosting EXPO 2017 in Astana, the Congress of Leaders of World and Traditional Religions, the Astana Economic Forum, the G-Global platform, The ATOM (Abolish Testing. Our Mission) Project and the Green Bridge programme.

“All in all, I must say that we have achieved a number of concrete results that further strengthened the position and prestige of our country on the world stage,” Sarybay said.

He also spoke about the main foreign policy events planned for the second half of 2013. Among them are President Nazarbayev’s forthcoming visit to Azerbaijan for the Third Summit of the Cooperation Council of Turkic-Speaking Countries on August 15-16, a trip to Russia to attend the G-20 Summit on September 5-6 and a September 12-13 visit to Bishkek to participate in the Council of Heads of State of the Shanghai Cooperation Organisation. The president will also be taking trips in the second half of 2013 to European and Middle Eastern countries.

Foreign Minister Idrissov will also visit New York to attend the 68th session of the UN General Assembly and hold a series of meetings with foreign colleagues. He also plans to visit Latin American states, Belgium, Ukraine and other countries.

Kazakhstan will be visited in the second half of 2013 by the President of China, the presidents of Belarus and Indonesia, the prime ministers of Thailand and Spain, the foreign ministers of Ukraine, Singapore and Russia, as well as other senior officials, Sarybay said.