ASTANA – With courage, speed and determination, Dakar rally drivers battle with thick sand baking sun and unfamiliar terrain, not to mention their opponents, to bring glory to their car and their team. For the Astana Dakar Team from Kazakhstan, however, there is one more goal: to promote the image of their country. 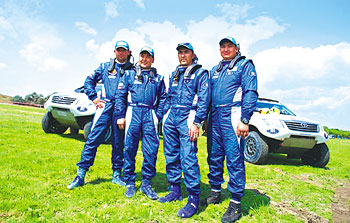 For the drivers of Astana Dakar Team to do well means to represent Kazakhstan at best.

Carrying the name of the 15-year-old capital of the emerging Central Asian nation yearning for international recognition places a great responsibility and pressure on Kazakhstan’s drivers’ shoulders. For the drivers of Astana Dakar Team, to do well means to represent Kazakhstan at best. Sometimes, it’s not only about winning.

“We are happy with our results,” said Baurzhan Issabayev, one of the drivers that managed to finish a Dakar race with co-driver Dmitry Yugai back in January 2013 in South America, giving Astana Dakar Team a good start to the season. “We managed to finish the race, although only 5 percent of new teams finish at all in Dakar. We managed to accomplish our main task – many people in the world now have heard about our country. It is too bad that other drivers of our team couldn’t finish. ‘All our hopes are with you,’ I was told, and felt my knees tremble,” he smiled. “Indeed, we felt the burden of responsibility,” he said at a press conference after the race. They secured 66th position at the Dakar leg from Lima to Santiago.

Since then, the Astana Dakar Team has seen ups and downs, but has improved in each grand prix this year and is steadily readying for the next big Dakar Race in 2014.

“We are preparing for two more races this year in Egypt, with hopes that the current situation stabilises, and in Morocco in September-October,” Gabdulla Ashimov, co-driver in the ‘car’ classification, told The Astana Times. Ashimov has been a co-driver on the Astana Dakar Team for nearly two years and since day one has been living “from one race to the next.”

“There are different types of races, and Dakar is the most challenging due to its length. The small rallies last up to 3-4 days, the Silk Way Rally up to 7-8 days, the Dakar Rally up to 14-15 days,” Ashimov explained.

“I work a lot, but even while working hard I realise that I’m waiting for the next rally. When you are there, nothing disturbs you. You switch off your phones, your laptops; it’s only the car and the road – so you can enjoy the ride,” he said.

One certainly has to swallow a lot of dust to prepare for this type of race, which is adventure as much as competition. When the car is drifting and skidding at every corner, Ashimov’s job is to navigate, figuring out the corners ahead or doing reconnaissance before the race and compiling a “pacenote” to guide them during the race. 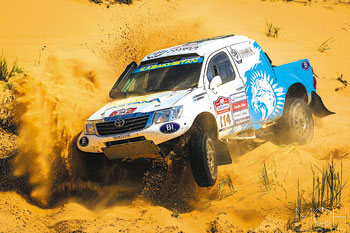 Courage, speed, drive... Kazakh rally drivers have shown these virtues during the most recent Silk Way rally in Russia, where they finished in top ten.

“I remember the first day – I was scared. This is an ordinary reaction, I think, if you do something for the first time. I tried to remember everything I had to remember and repeat it again in my head. But you have to concentrate and not panic, otherwise you fail. And that is unacceptable for the first day, because this is the most important part of the race. All other starts depend on how good you were in your first day,” he recalled during the interview.

The best result this year so far was in the Silk Way Rally, where two drivers from Kazakhstan finished in the top 10, including Ashimov’s car.

“We finished in the top 10; we drove a good, professional car. The difference between us and the car that followed us was only three seconds! But again, had we not had a mechanical breakdown that stopped us for about five hours, we could have finished third. Even the organisers emphasised this fact,” said Ashimov. This was a rapid improvement over January’s Dakar race.

The Dakar Rally is gaining more and more fans and generates excitement and national pride at each rally event. Astana’s team has a Facebook page (search for Astana Dakar Team), a website http://dakar-astana.kz/ and a big following now.

“The Dakar Rally has become one of the six types of sports supported by the Presidential Sports Club Astana. The Silk Way rally is so popular that mass media outlets are discussing changing the route to Astana-Moscow, and I hope with the help of such sponsors as BI Group and Samruk Kazyna … it will happen one day,” Ashimov said.

Under the leadership of veteran driver Artur Ardavichus and with the support of the whole country, the Astana Dakar Team has every chance to surprise a lot of people at next year’s rally. Ardavichus represents Kazakhstan in the ‘truck’ category. Aleksey Nikizhev, Nurlan Turlubayev, Aidyn Rakhimbayev, Bauyrzhan Issabayev, Dmitry Yugai and Andrey Cherednikov make up the rest of the team’s drivers and co-drivers.